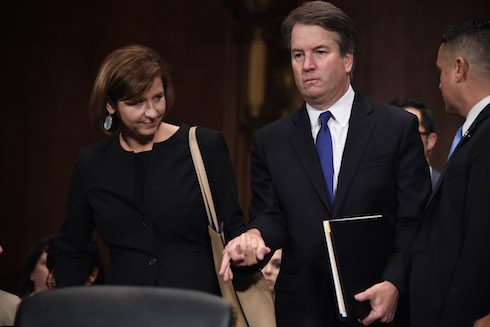 CELEBITCHY – Everything about the Senate-requested, White House-ordered FBI investigation into the sexual assault allegations against Brett Kavanaugh is pretty sham-tastic. I know I’ve always done my best work when I’m submitting it at 2:30 in the morning on the day of the deadline

JEZEBEL – Speaking of best work, Kavanaugh got the Wall Street Journal to publish an op-ed in which he calls himself both “impartial” and “emotional” and implies that coaching girls’ basketball is related to being a good judge. Does he have PR people, and are they the same ones in charge of Johnny Depp’s sputtering rebrand?

VOX – There are five swing votes on Kavanaugh; here’s where those five senators stand right now

THE BLAST – Amy Schumer was arrested for protesting the Kavanaugh nomination on Thursday, and there’s video of that; Emily Ratajkowski was also there, and says she was also arrested, although there isn’t video of that

THE BLEMISH – So there’s a fake Drew Barrymore interview out there in Egypt Air’s in-flight magazine and it’s pretty absurd (though, again, fake). The takeaway is that it looks like somebody might just be making stuff up, publishing it, and getting away with it because in-flight magazines are almost as widely read as toilet paper

REALITY TEA – Danielle Staub is doing the work of a full-time RHONJ cast member despite only being technically a “friend.” Witness this path of destruction as she shades Marty Caffrey, Margaret Josephs, Jacqueline Laurita, Caroline Manzo, and new Housewife Jackie Goldschneider in a single interview

LAINEY GOSSIP – The first full trailer for Netflix’s Riverdale spin-off The Chilling Adventures of Sabrina is here, and it’s getting great reviews even though it’s just a trailer. It stars Kiernan Shipka and kind of looks like what Sally from Mad Men would be doing in the 70s, so it almost serves as a Mad Men spin-off as well

DLISTED – Suge Knight, who originally took a plea deal back in 2015, has been sentenced to 28 years for his hit-and-run murder case. He’s already served three-and-a-half years, and could get out after serving a decade (so, by the spring of 2025)