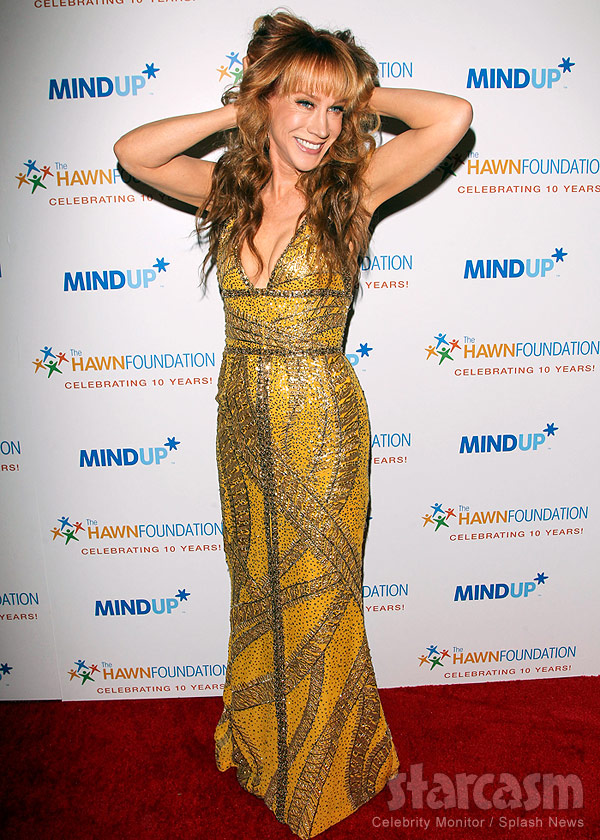 E! has officially announced that comedian Kathy Griffin will be replacing her mentor, Joan Rivers, as host of the network’s popular Fashion Police series. “I get it! These are some big shoes I’m going to fill,” Kathy said in a press release issued earlier today. “Joan was truly one of a kind. Now I hope you will accept me for me. I’m just Kathy. Did I say I’m just Kathy? I meant I’m Kathy F***ing Griffin and you celebrities better strap yourself in, as I am taking no prisoners. I am not holding back so DAMMIT let’s have some fun!”

Kathy seemed to foreshadow the announcement on Twitter yesterday:

The calm b4 the storm. If u follow me on soc media, definitely check in tomorrow (mon)! #KATHY pic.twitter.com/iShWeTbn0E

Joining Kathy in the E! studios balcony as the fashion industry’s version of Statler and Waldorf will be Kelly Osbourne and Giuliana Rancic, who return to the panel along with a new face: celebrity stylist and television personality Brad Goreski.

“Kathy just feels right, and Brad brings a fun, new voice to join Giuliana and Kelly in this ensemble,” said Melissa Rivers, Executive Producer of Fashion Police. “I’m excited to see where this panel takes this series my mother so adored in this next incarnation.”

E! Executive Vice President of Programming and Development Jeff Olde says of Kathy being named as Joan’s replacement, “Not only was Joan a trailblazer, she was also a dear friend and mentor to Kathy, who will no doubt continue her legacy and do the series justice by bringing her own unique comedic style and tell-it-like-it-is personality to the host chair.” He adds, “Plus, the addition of trendsetting stylist Brad completes the panel as the show begins its next chapter, which will focus on covering the major award shows and fashion events throughout the year.”

And speaking of those “major award shows and fashion events throughout the year,” Fashion Police “will air 17 style-studded episodes throughout the year, focused exclusively on the excitement surrounding the biggest red carpet and fashion events of 2015 including the Oscars, Grammys, Emmys, New York Fashion Week and more,” according to the release.

Now, we can just sit back and wait for the Kathy Griffin: Hollywood app! 🙂 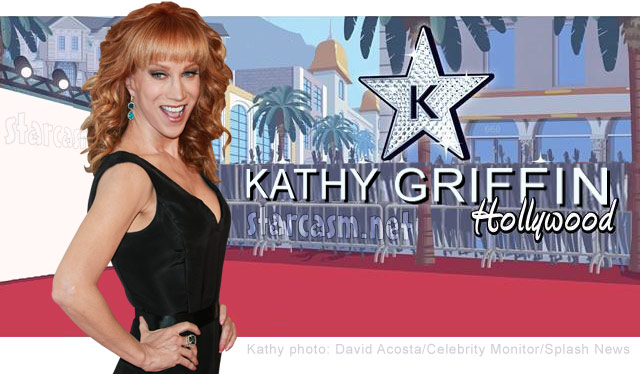 And just in case you needed more convincing, here are Kathy and Brad’s rather impeccable Fashion Police resumes:

Two-time Emmy and Grammy award-winning comedian Kathy Griffin is a towering figure on television, on tour, and in publishing. She breaks through the entertainment clutter with her universally recognized brand of pull-no-punches comedy. This year, Kathy made history with her 6th consecutive Grammy nomination and first win for Best Comedy Album (Kathy Griffin: Calm Down Gurrl), as one of only three female comedians to ever win Grammy awards for Best Comedy Album. In 2013 Kathy was inducted into the Guinness Book of World Records for writing and starring in an unprecedented 20 televised stand-up specials – more than any comedian in history. Buoyed by her dedicated and engaged fans, Kathy’s live standup performances are legendary and in a class of their own. Hundreds of thousands of people flock to see her perform sold out shows everywhere from Carnegie Hall to the Sydney Opera House.

Kathy draws a huge audience to CNN’s New Year’s Eve special, which she has co-hosted with Anderson Cooper since 2007, beating Fox News in the coveted ratings demographic. She is one of television’s go-to hosts for premier live events. After co-hosting The Billboard Music Awards LIVE three years in a row, this year Kathy hosted the 41st annual Daytime Emmy Awards LIVE and AARP’s Movies for Grownups Gala. Griffin’s sure-fire hosting success led to her own LIVE late night talk show, Kathy. It was where the biggest celebrities went to have the most fun. Her boisterous and revealing memoir, Official Book Club Selection: A Memoir According to Kathy Griffin, debuted at No. 1 on the New York Times Bestseller List. Griffin won two Primetime Emmy Awards for her hit reality series, Kathy Griffin: My Life on the D-List, which aired for six years on Bravo. It was nominated every single year of its run. The show also won the GLAAD Media Award for Best Reality Program and was nominated six consecutive times by the Producers Guild of America. Kathy was a cast member on NBC’s Suddenly Susan and guest starred on Seinfeld and Law & Order: SVU. She lent her unique voice to animated characters in Shrek Forever After and the award-winning television shows The Simpsons, American Dad, and Dilbert.

Griffin’s other awards and honors include The Human Rights Campaign’s Ally for Equality, Iraq and Afghanistan Veterans of America’s Leadership in Entertainment honor, GLAAD’s Vanguard award, The Trevor Life Award from the Trevor Project, and a Gracie Award for Outstanding Female Lead.

Brad Goreski is a fashion stylist and lifestyle expert. He is the former star of Bravo’s It’s a Brad, Brad World and currently serves as the Brand Stylist for Kate Spade New York for which he has styled a number of print and digital campaigns, as well as numerous fashion presentations at New York Fashion Week. His celebrity clients have included Jessica Alba, Demi Moore, Christina Ricci and Rashida Jones. Goreski’s work has been featured in InStyle, Details, Redbook and LA Confidential, and he has been featured twice on the cover of The New York Times style section. Additionally, as an on-air personality, he has appeared as an expert on TODAY, GMA and The View, and has hosted the “American Music Awards” red carpet, and served as a judge for the Miss Universe pageant. In 2012, Brad’s memoir, Born to Be Brad: My Life and Style, So Far, was released chronicling life stories and his favorite fashion tips.

Welcome to the family @KathyGriffin and @mrbradgoreski. Excited to laugh my tush off with U & @KellyOsbourne next month on @e_FashionPolice!

I am SO excited to be joining @kathygriffin, @GiulianaRancic and @KellyOsbourne on @e_FashionPolice! Can't wait to break it all down!!

PHOTO NeNe Leakes launching her own clothing line in 2014