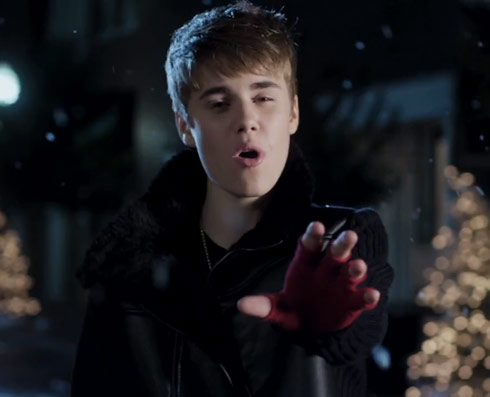 Justin Bieber dropped the video for the debut single “Mistletoe” from his highly anticipated Christams album on October 18th and it already has over 21 million views. The Bieber machine is in full crank and according to his manager Scooter Braun a natural occurrence assisted in helping with Bieber’s holiday cheer.

According to Braun, Under the Mistletoe is more “seductive” because “vocally, his balls have dropped.” Proof provided for this maturation is that the previously mentioned song “Mistletoe” is sung a few octaves lower than his smash hit “Baby” released in January 2010. The album is set for a Nov. 1st release and features collaborations with artists including Chris Brown, his sensei Usher, Boys II Men, Busta Rhymes and what should prove to be a monster single in the form of a re-do of Mariah Carey’s “All I Want For Christmas.”

As for that latter song, Mariah agreed to record it again with the Biebs if he agreed to sing in her original up there key. Braun stated, “That was the hardest song to do. A year ago that would have been no problem.” Justin agreed with Braun in his assessment. “Yes, that was high. But I grinded it out, and we got it down.”

Following his apparent ball dropping, Justin is scheduled to perform on Dick Clark’s New Year’s Rockin’ Eve With Ryan Seacrest helping that other ball drop in the NYC.