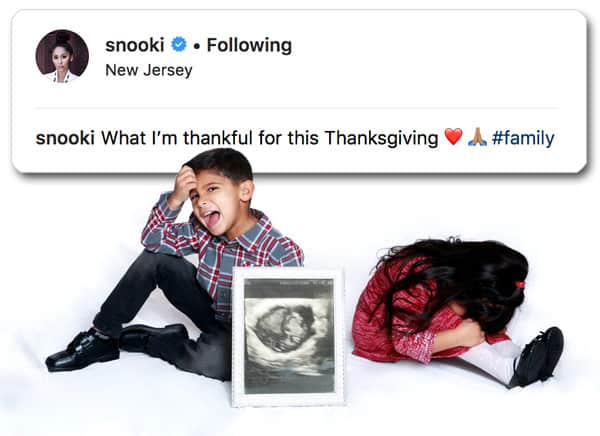 Jersey Shore star Nicole “Snooki” Polizzi is celebrating Thanksgiving with more than just a turkey in the oven! The 30-year-old reality star revealed earlier today that she is currently pregnant with her third child with husband Jionni LaValle!

Snooki made the big announcement on Instagram and Twitter with two photos of her son and daughter with a framed sonogram. “What I’m thankful for this Thanksgiving,” Snooki captioned the mini gallery, adding ❤️ ?? and #family.

Here are the pictures:

What I’m thankful for this Thanksgiving ❤️ ?? #family

Snooki has been very open about her and husband Jionni trying for a new baby, and she even said as much on last Thursday night’s episode of Jersey Shore: Family Vacation. After a long day of drinking, Snooki found herself throwing up — something that she was not accustomed to.

“I never throw up, even when I was little. So I’m like, OK, me and Jionni are trying to have a baby — maybe I’m pregnant,” she said. “I feel weird right now. I didn’t eat anything to make me sick, so why am I throwing up now?”

Snooki wanted to take a pregnancy test to be sure, “because if I’m pregnant, I’m not going to keep drinking.” And if the pregnancy test was not positive? “F**k it,” Snooki said, “I’m going to be upset and let’s go take shots at the club.”

After a drug store run with Jersey Shore bestie JWoww, Snooki took a pregnancy test and the results were negative. In addition to being disappointed at the result, Snooki was also a little disappointed in herself for not being the indestructible party machine she once was. “I’m so annoyed,” she lamented. “I’m just old and I can’t f**king hang anymore.”

Snooki spoke with Entertainment Tonight in late August and revealed that she and husband Jionni were continuing to “practice” in hopes of providing son Lorenzo Dominic (6) and daughter Giovanna Marie (4) a little sibling. “I’m practicing now. It’s going good. I’m not pregnant yet but, I mean, we’ve been practicing for a month now so…”

Well, you know what they say: “Practice makes pregnant.” 😉

Congratulations to Snooki and Jionni! I can’t wait for all the TMI pregnancy updates from Snooki over the coming months!