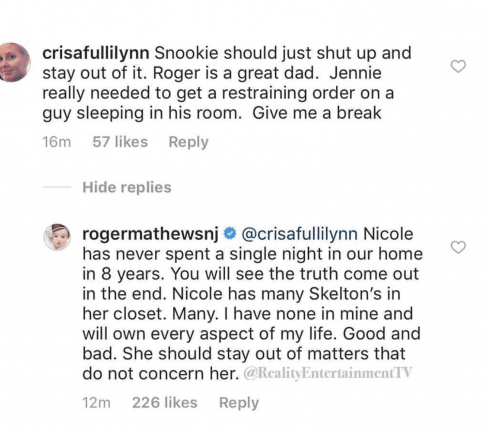 Last week’s domestic drama between Jersey Shore’s Jwoww and her husband Roger Mathews continued to escalate on Instagram over the weekend. Snooki, who is currently pregnant with her third child, posted a video of Jwoww talking with police. Roger reportedly had some choice words for Snooki for getting herself involved.

In a screencap of a comment replied Roger allegedly posted on Snooki’s Instagram he claims that Snooki has never spent the night at his and Jwoww’s house in the last 8 years. He also stated that Snooki has skeletons in her closet that will someday come out.

Snooki seems unfazed by Roger’s threat to expose her “secrets.” She responded when someone asked her about it: “I always mind my business boo. I got enough s—t going on. But if someone comes at my girl for the world to see, someone needs to defend the s**t talking. And for that, I will be there for her always.”

Jwoww filed for divorce from Roger in September. Just this Halloween they came together to celebrate Halloween with their children, but unfortunately this harmony was short lived.