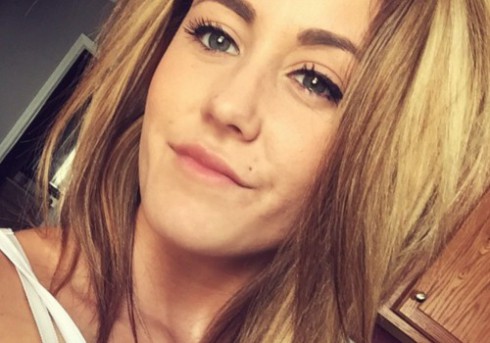 Teen Mom 2‘s Jenelle Evans is sought by the Myrtle Beach Police Department for allegedly assaulting ex-fiance Nathan Griffith on Tuesday night. She’s defending herself online by saying Nathan ran over her with his truck.

Myrtle Beach Online reports Nathan told the police Jenelle called him from a blocked number late Tuesday night and threatened to damage his truck if he didn’t go outside to talk with her. When he met her, Nathan said Jenelle “slapped, punched and tried to kick him down some stairs” and “scratched and clawed his back and neck.” He noted she smelled of alcohol.

Nathan said he struggled to get back inside his apartment. Once Jenelle left, he went to the police department to report the incident. Officers noticed in their report that Nathan’s ripped shirt and scratches were consistent with his story. The officer who wrote the report said they planned to charge Jenelle with criminal domestic violence.

Nathan ran over Jenelle with his truck before the incident in the police report. Jenelle is seeking charges & is ready to get the truth out.

Neighbors called the police after witnessing Nathan run Jenelle over. Her attorney is involved & this will be handled in compliance with LE.

For those asking,Jenelle was at Nathan’s to pick up her son.Nathan stole her phone & refused to hand over Kaiser.This is how it started.

Nathan and Jenelle reunited last weekend in New Jersey. The parents of 11-month-old Kaiser separated earlier this spring when Nathan was arrested for domestic violence. The charges against him were later dropped.

Jenelle Evans is “getting a divorce, ASAP” from Courtland Rogers