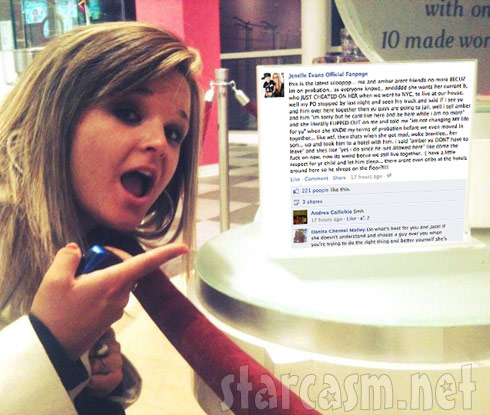 Teen Mom 2 Season 2 premieres on MTV on December 6 but Season 3 is already being broadcast on the internet right now! Jenelle Evans seemed to have finally settled down (both literally and figuratively) with her new roommate Amber when the two of them signed a lease on a wonderful rental home in early October. The two shared live video sessions on Stickam and even went to New York City together for Jenelle to tape the Teen Mom 2 after-show interviews with the rest of the cast.

But, things took a turn for the worse this week (or even earlier if you believe Amber) when Jenelle shared this on Facebook:

this is the latest scooppp… me and amber arent friends no more BECUZ im on probation.. as everyone knows.. anddddd she wants her current b, who JUST CHEATED ON HER when we went to NYC, to live at our house. well my PO stopped by last night and seen his truck and said if i see yu and him over here together then yu guys are going to jail. well i tell amber and him “im sorry but he cant live here …and be here while i am no more” and she literally FLIPPED OUT on me and told me “im not changing MY life for yu” when she KNEW my terms of probation before we even moved in together… like wtf. then thats when she got mad, woke brantlee.. her son… up and took him to a hotel with him. i said “amber yu DONT have to leave” and shes like “yes i do since he isnt allowed here” like come the f**k on now. now its weird becuz we still live together. :[ have a little respect for yr child and let him sleep… there arent even cribs at the hotels around here so he sleeps on the floor?!!!!

Amber then contacted TeenMomTalk.com to give her side of the story. According to Amber the trouble started a couple weeks ago when Jenelle’s ex Kieffer Delp was released from a Maryland prison after his arrest a couple months ago. Amber says Jenelle picked Kieffer up at the train station and brought him back to their house. During this time Kieffer was wanted by local authorities for yet another arrest prior to his incarceration in Maryland. (#delper)

Amber says she didn’t want her infant son Brantlee to be around Kieffer so it was that night that she took Brantlee and left to stay at a hotel. Amber then found a mutual friend willing to take over her room and her half of the rent.

Eventually Jenelle talked Kieffer into turning himself in, which he did a couple weeks ago, and then Jenelle reportedly approached her other former best friend Tori about moving in – without consulting Amber. 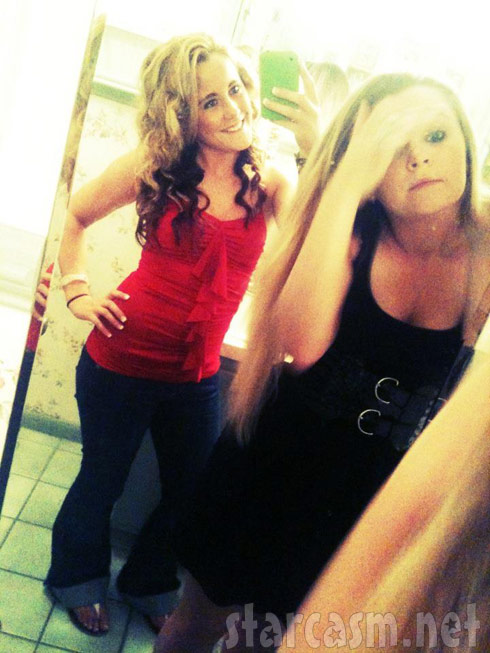 ^ Jenelle Evans and her roommate Amber from happier times

As far as the parole officer claims, Amber says Jenelle’s parole officer did see her boyfriend Joe Whitaker’s truck in the driveway and did tell Jenelle that if the two were caught together they would go to jail. (I’m assuming ol’ Joe Whitaker has had some drug-related issues in the past. Jenelle’s probation states that she cannot “… knowingly associate with any known or previously convicted users, possessors or sellers of any illegal drugs or controlled substances.”) Jenelle told Amber Joe could no longer come to the house, which of course angered Amber because Kieffer was (she claims) living with them at the time! And we all know about Kieffer’s history with drugs!

After the Amber article was published, Jenelle took to Facebook again to offer this counterpoint:

lets see…. ive never seen kieffer. he never came to my house. I CALLED MY LANDLORD and told her how her “f**k buddy” JOE WHITAKER is a drug dealer and needs to stay away from me AND her son. not to mention MY LANDLORD TOLD ME to report back to her tomorrow morning about ME removing MY name off the lease becuz amber is too stuck up joes ass. im also very disappointed how her son has to wake up to… a different man in “mommy’s bed” every morning. :/ very veryyyy sad. not to mention she washes her son in our dirty kitchen sink.

amber is correct about Daryl.. i wasnt allowed to be around him so i BROKE UP WITH HIM after a week and that was the end of that. amber has been staying at MY HOUSE ever since the argument and she is claiming that i have to switch the utilites in HER name so she gets my deposits back? hahahahahaah YEAH RIGHT.

amber posted my number on this fanpage which caused ME to change my number at 9am this morning for $25 on my bill. not to mention MY OWN MOTHER is very upset with the actions amber took the other night to take her son out of his crib at 10pm to leave the house with joe when she didnt HAVE to leave… only joe did.

now amber has joe, her ex husband ben, james, and her ex fiance steven sleeping over everyother night and amber claims she is having a hard time “juggling boys these days.” every other day she goes on different dates with each of these guys. to the movies, out to eat, everything. she doesnt even kno who the father to her son is. she has 5 different fathers it can possibly be :/ sadddddddddddddd. THIS is the true story.

As is often the case with Jenelle’s situation, this stuff is entertaining but quite serious. If Kieffer Delp was staying with Jenelle then that would clearly be a violation of her probation (Kieffer is named specifically) and she could go to jail. So this could all boil down to how far Amber is willing to push things. That being said, Jenelle might want to (figuratively) take a chill pill and try to smooth things over instead of fanning the flames! She only has a little while left on her probation and I’m sure she doesn’t want to throw away all her hard work (not to mention jeopardize her upcoming “Road To Redemption Tour“) over this!

Stay tuned, I’m sure there will be more soon.