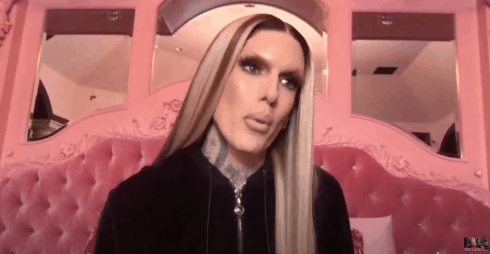 Today Chris Hansen interviewed Jeffree Star, now a huge YouTuber and makeup industry titan, who once went on tour with Dahvie Vanity during his former stint as a singer. Jeffree is currently getting heat on social media for calling Dahvie out for his predatory behaviors in the past and then going on to work with him for years, even calling him a “brother” despite all the despicable things he accused Dahvie of. Now many girls and women are coming forward to support the claims Jeffree once made about Dahvie. 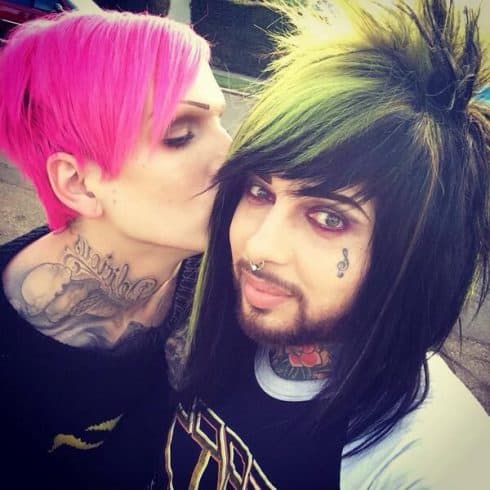 In 2010 Jeffree tweeted that witnessed Dahvie bring underage girls to his hotel room to do sexual things. He called Dahvie “disgusting” and “evil” at the time. He went on to say that he would never work on a song or tour with Dahvie again, and claimed that if you support Dahvie, you support “child molestation.” 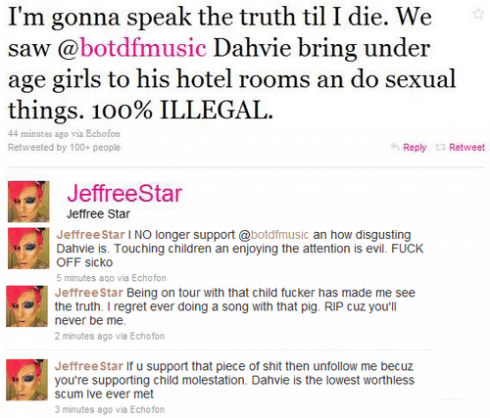 By 2011, Jeffree went back on his word and went back to collaborating and working with Dahvie, even calling him his brother. 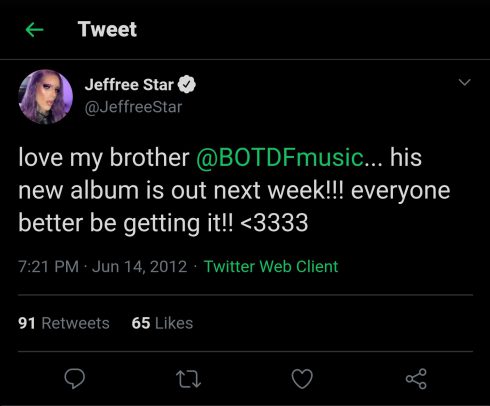 The floor then goes to Jeffree, who started off by saying that when he quit music, he “quit everything.” He said he never spoke to anyone he used to associate with in that scene until now.

He goes on to note that the allegations against Dahvie have not been a shock to him because “Dahvie has always been terrible.” He says he’s happy that “people are finally getting a voice” in regards to this situation. “At the end of the day the goal is for him to be sitting in a prison cell, so I’m ready to dive in,” Jeffree reveals about his intentions of speaking about his former friend.

Jeffree says he met Dahvie because Dahvie was a fan of Jeffree. He also felt that Dahvie was trying to copy some of the things that he did, including his MySpace music. Jeffree says he did anything and everything during that time to garner attention. “It was really wild times and a lot of it was not ok . . . I regret alot of those times but it’s made me who am I am today,” Jeffree says of his former self.

In 2006 Jeffree did his first song with a Myspace group called Hollywood Undead, and he continued in the Myspace, punk/emo/electronic music scene until 2013, when he quit everything and walked away.

Jeffree then addressed a clip of Jeffree Star on stage with Dahvie Vanity while he was grinding with a girl he had pulled on stage who looks very young. The clip can be found in the first few minutes of this video by CreepShow Art:

“In those days,” Jeffree explained, “and maybe in still today’s times, in the rock-n-roll world and the music world people brought kids, adults, anyone in the crowd on stage to dance and have a ‘good time.’ Now, him grinding on people, when you look at that now in context and they’re underage, yes it’s completely disgusting, but everyone at every single show, whether it was Blood on the Dance Floor show, my show, any rock show, you grabbed people on stage, you danced, and you threw them back in the crowd.”

Jeffree on stage with Blood on the Dance Floor:

Jeffree doesn’t feel that he is responsible for Dahvie’s actions. Still, looking back Jeffree feels horrified by the things he’s seen Dahvie do. He feels that Dahvie is such a “master manipulator that he makes things seem not as crazy as they were.” Jeffree misspeaks by saying he’s witnessed Dahvie be very “appropirate” with minors (it seems from the context he meant “inappropriate,”) but he says he has not personally witnessed an actual crime.

Chris asks Jeffree about reports that Jeffree Star came on a bus when Dahvie had a younger girl on the bus, and instead of doing anything, he kind of looked the other way.

“This is what’s crazy, Chris,” Jeffree says. “Mother would bring their daughters on the tour bus. So I never saw minors alone with them, never. But there would be moms who would bring their kinds, whether they would be underage or not, on his bus, and let’s say I popped in to say hi to Jay, because me and Dahvie were never ‘best friends’ I want to be very clear about that . . . Jay and Brandy were my friends, so when I would go on the bus for shorts amounts of time and visit, whether we would say hi, we smoked weed, we just talked and catch up, there was always moms with these people.”

Jeffree’s perspective has legs because at least two victims: Damien Leonheardt (Jessi Slaughter,) and Ellie have reported their parents involvement with their relationships with Dahvie. Ellie even recounted a story of her mom drinking with Dahvie while Ellie watched the same night she was first assaulted by him.

Jeffree did say his bandmembers told Jeffree that Dahvie would sometimes have threesomes with moms and their daughters. He went on to say that Dahvie’s former bandmate Jay should speak out further or go to the police because Jeffree feels Jay knows more than he’s telling. “Dahvie brainwashed Jay, almost like a cult,” Jeffree says.

“He fed him. He controlled his money, the way he looked a dressed,” Jeffree goes on. “At the end I just felt so sad for Jay because he was so lost. And I think that Dahvie really brainwashed him. I don’t know what he has against him. Is there contracts, is there dark secrets that Jay did that he knows against. . I don’t know, but I’m not sure why Jay isn’t telling the truth.” He then implores Jay to “do the right thing.”

Jeffree goes on to talk about Dahvie’s financial control of Jay, saying that he did not have his own bank account and claiming that Dahvie would run things through Jay’s tax ID for the band.

Jeffree explained that he always got a weird vibe from Dahvie. He also addressed the fact that many people aren’t happy that Jeffree brought his fans around Dahvie. He explained that many of his fans would go to concerts only to watch him, and again stood firm that he did not personally associate with Dahvie, even back then.

He then noted that there was a year where he befriended Dahvie, but noted that on their last tour together they didn’t really speak at all. He claims Dahvie was jealous of Jeffree during this time and didn’t even want his band members to speak to Jeffree.

“They want us to talk about my tweets Chris, and I think that it’s very important to address it,” Jeffree says. “Why did I tweet certain things about him being a piece of sh!t, and seeing things and why did work with him again?”

Jeffree explains that there were a lot of rumors about Dahvie, but aside from one instance that almost got him in legal trouble, he never served jail time. “There was a time when a lot of us in the music world were not sure what was really going on. It was being in the moment of not knowing, believing it all because it was very believable, but then at the end of the day there was not proof.

“So yes, I tweeted out a lot of things. Did I ever see an actual sexual crime? Absolutely not. Did I see weird inappropriate behavior? Yes. Did I call him a child molester? Yes. Because at the time I really believed it . . . Later did I think that some of it was untrue? Yes . . . But I meant those tweets at the time and it was a time when there were a lot of us all on the same page and hyping it up . . . At that moment, when I tweeted all those things, yes I fully believed it.”

It should be noted that when these tweets, some of which are pictured above in screenshots, were found, Jeffree told Youtuer Petty Paige that they were photoshopped. In this interview with Chris Hansen, Jeffree is admitting that he made these tweets.

Below is a screenshot of the DM he sent Paige. 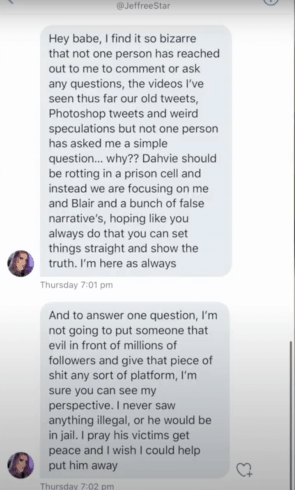 In the DM he also noted that no one had reached out to him about this situation. YouTuber Repzilla had a response to this claim, because he said he HAS reached out to Jeffree Star about his connection with Dahvie Vanity.

I reached out to both him and Jayy Monroe and never got a comment… pic.twitter.com/pJbN4YOHwR

Jeffree says Dahvie tricked himself and others into thinking none of the allegations were true, mostly because he wasn’t actually being charged with crimes. Jeffree says he thinks that Dahvie’s ability to convince him he was an “ok person” is scary and he feels regret over believing Dahvie.

Jeffree says he was not around during the incident in Colorado where Dahvie was almost arrested for assaulting a minor after she called into a radio show and revealed what he had done to her. He only got away at that time because the child refused to cooperate with police. Jeffree says he had heard about the incident.

Dahvie buried the incident and claimed the girl had been lying. “There was a point where no one knew what to believe,” Jeffree says.

Chris asks what responsibility Jeffree had at the time to report wrongdoing, and Jeffree again says that he never witnessed anything to incriminate Dahvie. “If I had ever saw, witnessed something, he would be rotting in jail at this very moment,” Jeffree claims.

Jeffree explains that he called Dahvie his brother in a 2012 tweet because he has a tendency to be dramatic and grandiose. “Dahvie was never my brother, we were never best friends,” Jeffree says.

“So let’s talk me tweeting that he’s a monster, and then working with him again,” Jeffree goes on. He says he had a list of bands to tour with with his last tours and their name was on the list. Jeffree was still friends with Jay and Brandy and Dahvie had reached out to Jeffree again. Jeffree asked Jay and Brandy if they had ever seen anything illegal with Dahvie and neither of them said they’ve seen anything illegal. “I took her word for it,” Jeffree says about believing Brandy when she said she never saw anything illegal.

Chris Hanson notes that he has talked to someone who also worked with Dahvie who also said that she never actually saw him commit a crime.

Jeffree says that he called Dahvie a “child molester” at the time, even though he had never actually seen anything himself, because at the time everyone was portraying Dahvie as a devil. “Looking back, he is,” Jeffree notes.

He relates that because he’s always been misunderstood he felt a soft spot for Blood on the Dance Floor at the time and had bought into Dahvie’s explanations. Jeffree calls the 2012 tour “one of the biggest regrets that I have, but I can’t take it back.”