On March 30, Jay Z and an army of some of the most successful musicians on the planet including wife Beyonce, Rihanna, Kanye West, Jack White, Nicki Minaj, Daft Punk, Madonna, Usher, and Chris Martin announced a brand new streaming service called Tidal, an app that cost more than competitors Pandora and Spotify, but which was artist-owned and promised that more of the revenue would make its way to the actual artists.

Well, it seems the strategy of having billionaires wanting you to pay more so they can make even more money didn’t pay off too well as Tidal has already dropped out of the Top 700 downloaded iPhone apps.

Obviously, the streaming service was not intended to solely make more money for the wealthy artists featured at the announcement, but many marketing experts (and non experts like myself) are saying that was the perception created.

Adding to the non-Don Draper approved marketing nightmare is the fact that the Tidal campaign highlighted how inexpensive the other streaming services are, which may help explain why Pandora and Spotify both saw a HUGE boost in downloads immediately after the Tidal announcement. 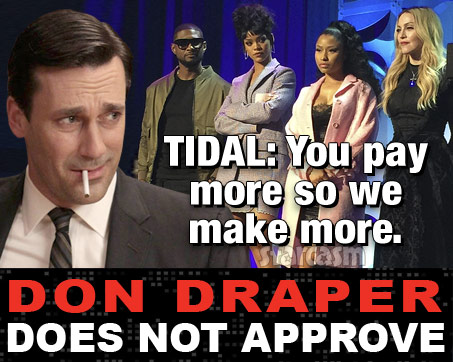 On April 20th, Pandora and Spotify occupied positions No. 3 and No. 4 on the U.S. iPhone revenue chart, respectively. This was the first time two music streaming services have hit the top 4 in sales simultaneously. In order to achieve the feat, Pandora and Spotify had to push out Candy Crush Saga out of U.S. iPhone top 4 revenue chart, which is a remarkable achievement.

And to add injury to injury, the reviews of the Tidal app itself (from those few who downloaded it) were far from positive.

Tidal seems well aware of its floptitude, as evidenced by the recent departure of Tidal parent company Aspiro CEO Andy Chen as part of a “streamlining” that also saw more than 20 other employees let go.

I think at this point it is safe to say that Tidal is no longer a sinking ship and that any rearranging of deck chairs at this point is all being done under water. In other words, it’s time for a Tidal wave good-bye.

Barack Who? Kanye West Is The Prezizzle!

Cher calls Madonna a ‘b**ch,’ shares her opinion of her artistry