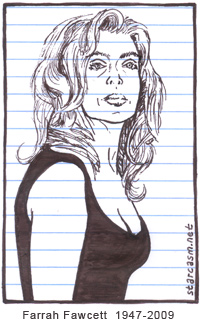 Actress Farrah Fawcett died this morning after a long and difficult battle with cancer.

People is trying to keep up with the nice things others in the entertainment industry have to say about Farrah Fawcett here.

In a previous post (which included a very favorable review) I embedded video of the complete Farrah’s Story documentary, but it appears as though MSNBC has removed them from their site. Check back though, because surely they will either repost them or announce new air dates for the documentary. Also, I did a tribute post soon after I heard Farrah’s condition was worsening that includes a large drawing, some of my thoughts about Farrah and some fun scans of Charlie’s Angels trading cards.

Redmond O’Neal Arrested For Drug Possession While Visiting A Prison