The former Charlie’s Angels star was filming with a handheld camera on the day she found out from her doctor that her cancer had returned and opted to keep the camera rolling.

“Farrah was devastated,” says Farrah’s long-time partner Ryan O’Neal in an exclusive interview with People magazine. “It was horrible, terrible news.” But Farrah opted to continue filming. Stewart says, “She wanted to tell the truth. There were times I’d stop filming because I thought it was too personal and she said, ‘This is what people go through with cancer. Film it.’ So I would.”

The film continues after the diagnosis and documents the last two and a half years of Farrah’s struggle with the disease, including numerous trips overseas for treatments not available in the US. Ryan says Farrah stayed strong and hopeful throughout, even as her health continued to decline, “The hope started to fade. But not for Farrah. She continued fighting. There was always a courage there, and a quiet dignity. Farrah never changed. I fell in love with her all over again because of how she handled this.”

In appreciation of the Hollywood icon that brightened the walls of millions of teenage boys around the globe, here’s the latest addition to the Starcasm Pinup Collection: 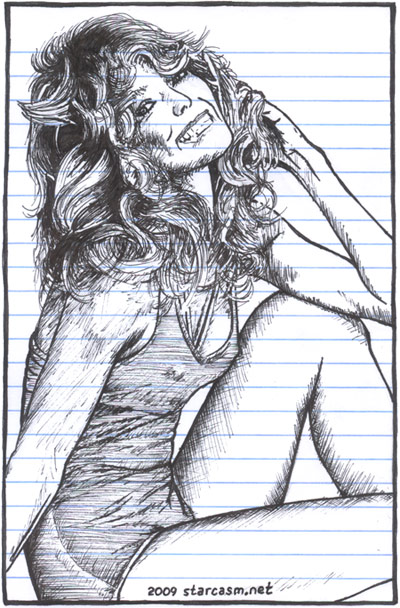 Farrah Fawcett was able to convert a sexy poster and one season on Charlie’s Angels into a critically acclaimed acting career that includes three Emmy nominations and a Golden Globe Best Actress nomination for the 1986 movie Extremities. (My personal favorite is her appearance as Robert Duvall’s wife in the fantastic 1997 movie The Apostle, which earned Duvall a Best Actor Oscar) Though it may not be an entirely appropriate way to show my appreciation to Farrah, I dug out my Charlie’s Angels trading cards and assembled some of my Jill Munroe favorites.

The first two are actually stickers that somehow miraculously never got stuck on my A-Team lunchbox, Huffy dirt bike or Transformers Trapper Keeper – though I am seriously considering sticking one on my iMac. They are masterpieces of pre-PhotoShop graphic design, capturing perfectly the exact same colorful stars and moons I saw during every episode of Charlie’s Angels. They suffer a little because they come from a time when “cut and paste” involved actual scissors and glue, so those immaculate feathered locks come to an unnaturally sudden stop, but otherwise these stickers are guaranteed to take any boring object with a flat surface and turn it into a hetero-erotically charged magical talisman! 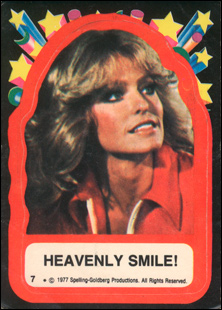 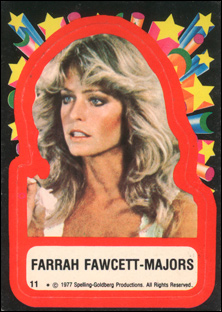 The stickers are the coolest, but these next few cards are my favorite. They capture a dark point in American history – back from before blonde women had won the right to vote. Apparently it was considered a momentous and trading-card-worthy accomplishment for these yellow-haired ladies to have an idea, brainstorm or comprehend an assignment. I like the serious look of sympathy and concern on Bosley’s face, as though an idea might cause Jill to hemorrhage or pass out. I also appreciate the insidiously subtle difference between “Jill brainstorms” and “Jill gets a brainstorm,” the latter of which sounds like a medical condition that surfaces occasionally in women with fair tresses. 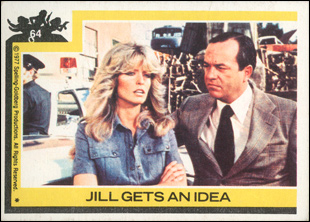 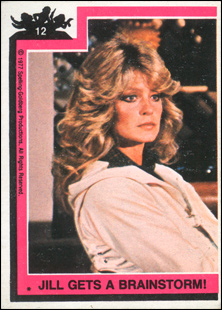 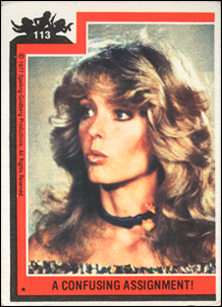 And here are some great plot shots. The first screams “missed opportunity” to all those alternative bands out there with ridiculous names: “Dude! Take a listen to this new album by The Dynamite Trap!” The image even looks like an alternative album cover, or maybe a Joseph Cornell box, had he lived to witness the beauty of Farrah. The second one I like because the captioning does a wonderful job of downplaying the image. It’s not “Jill and the ransom money,” but just “Jill and some ransom money.” Oh, and is there anything more majestic than Farrah Fawcett on a skateboard? She doesn’t even have to push with her foot, the natural motion implied by her windswept hairdo is enough to propel her along. Perhaps the answer to our renewable energy problems are in those golden locks! Farrahol! 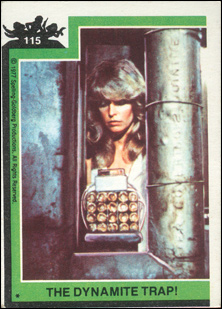 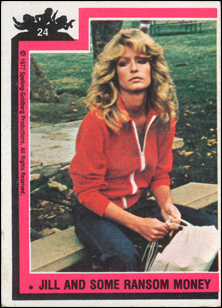 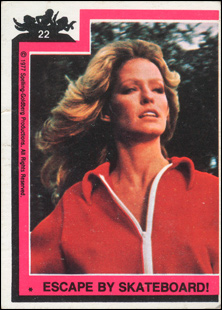 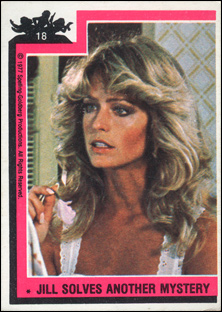 These last few are simply Farrah Fawcett as Jill Munroe in all her hawt glory. 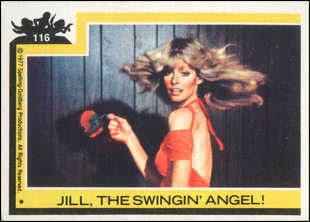 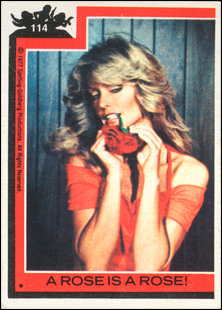 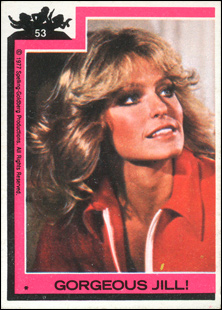 As I mentioned before, the solution to breaking our dependence on fossil fuels may lie in those fanciful Fawcett follicles. Don’t think for a second that scientists aren’t on it already! They’ve been working on a way to foster this renewable energy among the female population and have even built this prototype: 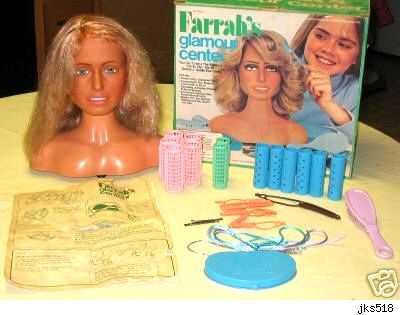