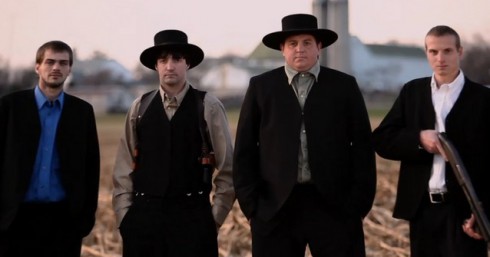 Discovery channel’s Amish Mafia is ending it’s 3rd season tonight. While most reality shows have some degree of production manipulation, Amish Mafia seems to blurr the lines between reality and reality television even further. Just how real is this show?

The concept of the show is framed around Lebanon Levi Stoltzfus and his gang of Amish “fixers,” who dole out outrageous vigilante justice. On tonight’s episode, the Season 3 finale, Levi and his crew steal a car and then blow it up. This is the type of stuff that real law enforcement couldn’t turn a blind eye to.

Here’s the deal: while the people are real people who live in Lancaster, PA, all of these exciting outside-the-law antics are purely scripted. Unlike other reality shows that recreate scenes that actually happened, or arrange certain situations to incite drama, these scenes are purely fabricated. “They are actual people,” Laurie Goldberg, Discovery’s vice president said in a 2013. “These are real people in the Amish and Mennonite communities.” They can be real people in these communities (which are two very different communities, btw,) but that doesn’t mean that they are practicing Amish or Mennonites. According to locals, the people on the show are not currently members of the Amish church.

Furthermore, local cops Steven Echternach and Jonathan Heisse, who are liaisons to the Amish community, have found no evidence of the gun-wielding crimes that have taken place on the show. “I can say with absolute certainty that what I’m seeing on Discovery Channel is an exploitation of the Amish culture,” Echternach said to Lancasteronline.com. “It’s not a complete blatant lie, but the characterization is very misrepresentative.” When violent organized groups exist in a community, often the police are aware of the activity even if they don’t have enough evidence for arrests. Lieutenant Heisse says that if there was an Amish Mafia, “I think we would have heard about something like that.”

But, the show’s producers are sticking to their guns, and have an answer for local police who have no knowledge of the Amish Mafia. “We were told they don’t go to the police,” says the show’s executive producer Dolores Gavin. “We stand by these stories and this series as factual and accurate.”

Was Hazel Grace from The Fault in Our Stars based on a real girl?