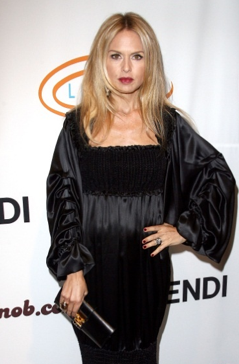 Rachel Zoe, the twig of a woman who graces our Bravo 10 o’clock spot Tuesday nights and has enough nervous breakdowns over the course of an episode to make the home viewer need an arsenal of Xanax, is a curious fashion force. She is at once insufferable and fascinating. She’s a shallow obsessed woman who indirectly promotes an unhealthy skinniness, but it’s hard not to admire her enthusiasm for fashion, glamour, and expressing yourself through style.

She also may be the single most reason why celebrities switched from skulking around in their normal lives looking close to death (like the rest of us) to adding a little bling, color, and makeup to their trips to Starbucks. Maybe it’s not a noble cause,but the lady has managed to add a little bit more fantasy into everyday celebrity culture. It should be no surprise then, to learn that in the meantime shes also added millions to the coffers of the designers featured in the tabloid antics of her former Zoe-bots: Lindsay Lohan, Mischa Barton, and of course, her very special creation, Nicole Richie.

Now she’s more focused on dressing Demi Moore, Cameron Diaz, and Kate Hudson for the Oscars than supplying Lindsay Lohan with her third outfit of the day, but that’s how she really got her foot in the fashion and pop culture door and started to lit-er-ally change the game for Hollywood starlets and designers alike.

How did she get her start in fashion?

The New Jersey raised Rachel Zoe (real name Rachel Zoe Rosenzweig) grew up admiring her art collector mother’s stash of designer gowns, but went on to major in sociology and psychology at George Washington University where she met her husband Rodger Berman.

Immediately after she graduated she landed jobs in New York at Gotham Magazine and then YW, where she got to style young pop stars like Britney Spears, Jessica Simpson, and The Backstreet Boys for photo-shoots. Eventually she starting working freelance, but she really made a name for herself when she began working with Nicole Richie shortly after she achieved fame with Paris Hilton on Fox’s The Simple Life. On the first season Richie’s figure was a bit larger than Hilton’s, but definitely not fat. Once she started working with Rachel, though, she helped champion a signature style that was almost as much about her rapidly disappearing frame as her over-sized jewelry and loose-fitting bohemian-style dresses.

What she and Zoe were able to do together was kind of a phenomenal. Richie, who already had the strange degree of fame afforded reality stars, was now becoming a fashion star of sorts. Through Rachel’s close guidance she developed a definite look wherever she went, and that intensified her fame, or her brand. Because she was always dressed in her signature style, the paparazzi loved her. She sold magazines, website page-views and also the designers she wore, and soon other starlets like Lindsay Lohan, Mischa Barton, and Kiera Knightly wanted a piece of the prize.

Zoe’s relationship with her career-making client Nicole Richie ended badly. Reports swirled that Zoe had been fired, and were followed by this blind item posted on Richie’s MySpace account:

“What 35 year old raisin face whispers her order of 3 peices of asparagus for dinner at Chateau everynight, and hides her deathly disorder by pointing the finger at me, and used her last paycheck I wrote her to pay for a publisist [sic[ instead of a nutritionist?
HINT: Her nickname is lettucecup…”

How much do Zoe’s services cost?

According to a reports a few years old fashion stylists like Zoe charge about $4,000 to $6,000 per day for services, plus the cost of assistants. Most of the time these fees are paid for by the film studios and television networks that are trying to promote a specific movie or show. Many celebrities just need stylists for special events, but some also want their everyday looks styled (a la Nicole Richie).

As for the dress fees, because the nature of Rachel’s press-courting that can generate major $$ for designers, most of the items we see Rachel acquiring for her clients are borrowed. That means in the end the clients are paying for Rachel and her staff for services, but no one drops a penny on dresses, bags, and shoes (unless you’re changing clothes three times a day like Lindsay Lohan once did, then you’re buying a great deal of clothes as well as employing Rachel’s services.)

This type of fashion-publicity machine is pretty brilliant, but as we see in a major storyline on this season of The Rachel Zoe Project, it’s become a life-consuming obsession for Rachel that takes away from her relationship with her husband, or time to do other things besides eat and breathe fashion. Sometimes human beings need to sit down with a hearty meal with the people they love and just breathe air.