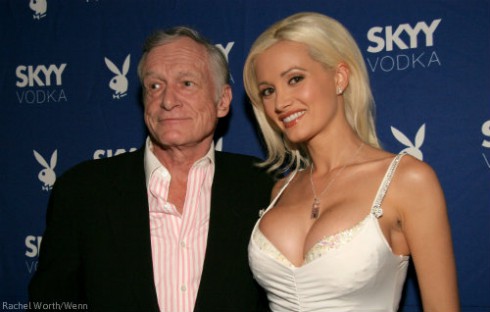 Kendra Wilkinson isn’t the only one Holly Madison takes issue with in her new book, Down the Rabbit Hole: Curious Adventures and Cautionary Tales of a Former Playboy Bunny. In other segments, the former Girls Next Door star opens up about her experiences while living in the Playboy Mansion and serving as Hugh Hefner’s No. 1 girlfriend.

In an excerpt shared by Us Weekly, Holly described how Hef hit on her during their first meeting in 2001:

“‘Would you like a Quaalude?’ Hef asked, leaning toward me with a bunch of large horse pills in his hands, held together by a crumpled tissue,” Holly recalled of the first words he said to her. When she declined the offer, “Hef did not miss a beat: ‘Okay, that’s good,’ he said, nonchalantly. ‘Usually, I don’t approve of drugs, but you know, in the ‘70s they used to call these pills thigh openers.’ I want to scream ‘PAUSE!’ and freeze-frame that moment of my life. I want to grab that young girl, shake her back into reality and scream, ‘What the hell are you thinking?”

When Holly later moved into the Playboy Mansion, she was the lowest woman on the totem pole. On one of her first nights there, Tina Jordan — Hef’s top-ranking girlfriend at the time — instructed her and the rest of the girls to change into pink flannel pajamas. She was advised to “fake” everything by the other women.

“When I think about it now, it’s almost comical. Every red-blooded American male has no doubt fantasized about what went on in Hefner’s bedroom with his harem of blond bombshells. The answer? Not a whole lot,” Holly said in an excerpt obtained by Too Fab. Saying there was no intimacy or even kissing, Holly added, “My turn was over just as quickly as it had started.” 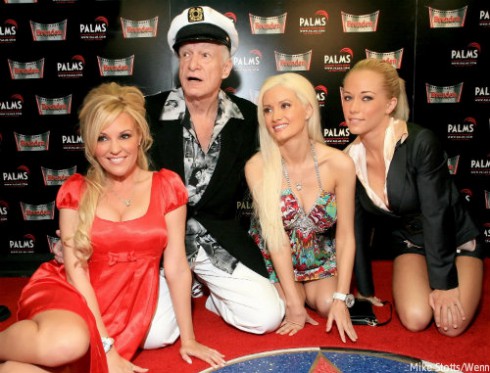 Despite all the red flags, Holly said she tried to have a baby with Hef “as a ticket out.”

I know how absolutely insane it sounds to want to have kids with someone in their 70s. You are basically robbing a child of his or her father before it is even born. Now that I am a mom myself, the idea seems even more unpalatable. But I suppose I thought of it as a ticket out – in more ways than one. The last time the mansion had been multiple-girlfriend-free was when Hef was married and had two children.

Holly said she and Hef went so far as to submit his semen samples to a fertility doctor, but nothing was viable. That, she said, “was concrete proof slapping me in the face that there was no future for me at the mansion and it was either sit in there and rot or take the plunge and face the world.”

When she told Hef she intended to move out, Holly said he tried to bribe her by putting her in his will.

“The will stated that $3,000,000 would be bestowed to Holly Madison at the time of his death (provided I still lived in the Mansion). At the time, it was more money than I’d ever know what to do with,” she said. “But I didn’t want it. I actually pitied him for stooping to that level. I couldn’t help but be offended. Did he really think he could buy me?”

It wasn’t until even later that Holly said she really grasped how controlling Hef was.

“I learned Hef was the manipulator and that he pitted us against one another,” she said. “I realized I wasn’t treated well. I’m done being afraid of people. I don’t have any loyalty to Hef. I haven’t talked to him in four years, so there’s no reason to reach out now. Besides, it’s the truth.”

Holly was able to reveal so much about her experience because she never signed a non-disclosure agreement. She said she hopes the book will help others — but mostly wanted to get it out there so her 2-year-old daughter will know to choose a better path. As Holly told Us Weekly, “I want her to understand why I made the choices I made and hopefully learn from them and not make stupid mistakes herself.”

Holly’s memoir is due out on June 23.