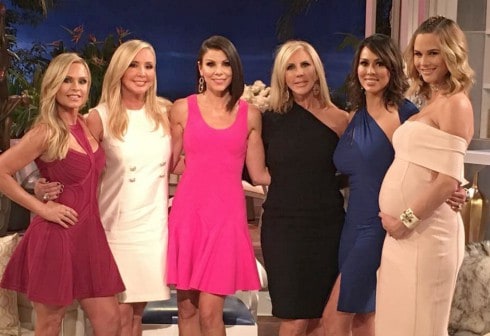 After five seasons on the Real Housewives of Orange County, Heather Dubrow is leaving the show.

“After a lot of careful thought and deliberation, I have decided not to return to RHOC this season. These past five years have been an incredible journey and I’m so proud to have been a part of such an iconic piece of pop culture,” Heather explained in a statement released earlier today.

“I am so grateful to Evolution Media, Bravo and the whole NBCU family for all of the incredible experiences and the opportunities RHOC has afforded me and my family. However, at this point in my life, I have decided to go in another direction and do what’s best for my family and career. Should I change my mind, I thank Andy Cohen, Evolution and Bravo for telling me that the door is always open.

In her podcast, Heather elaborated on other key factors that contributed to her decision to leave the show including her oldest children becoming teenagers and her desire to work on other projects.

If you’re wondering why I decided not to come back. It wasn’t an easy decision. It’s hard to walk away from something that first of all is successful and you’ve been doing for five years and truly has given us so much. But I just feel like right at this particular point in time a couple of things. First of all my oldest kids are now teenagers and I just felt like they need to make their own decision about being on television and exposing their lives and for me personally I have some really cool interesting opportunities going on right now that I want to explore. I don’t know where they’re going to go but I want the opportunity to explore them and I felt like it was at a tipping point and it’s time.

Heather also took a few minutes to reflect on the impact RHOC has had on her life. She credits her time on the show to “getting her creative juices flowing” which resulted in a variety of projects including Botched, Consult Beaute, and Dr. and Mrs. Guinea Pig.

Not long after the news broke of Heather’s departure, a report surfaced claiming the real reason Heather left the show was because she was being demoted to a Friend of the Housewives.

According to The Dirty, “Production was bored with her storyline. It’s been about her house and wealth for years, and they didn’t feel there was enough substance for her to return again as a full-time Housewife.”

The source summed it up by saying, “Heather turned down the friend role and thus left.”

Are you surprised Heather is leaving the show? Will you miss her on RHOC?