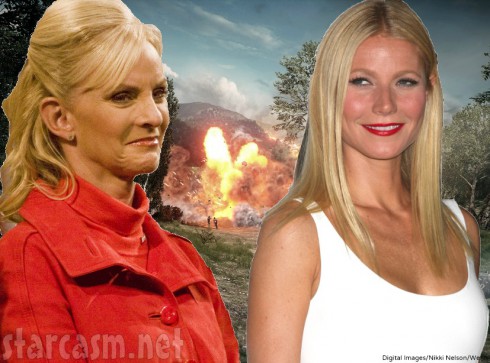 Gwyneth Paltrow has done it again. During an event this week, the Goop executive managed to offend thousands by comparing her struggles as a celebrity to what soldiers experience on the battlefield.

“You come across [online comments] about yourself and about your friends, and it’s a very dehumanizing thing. It’s almost like how, in war, you go through this bloody, dehumanizing thing, and then something is defined out of it,” she said during a surprise appearance at Code Conference in California. “My hope is, as we get out of it, we’ll reach the next level of conscience.”

She made the comments on Tuesday. The day after Memorial Day. A national holiday that we use to pay tribute to soldiers who sacrificed their lives…

It’s unclear how well-received the advice was among the techies in attendance, but it definitely hasn’t gone over well with the general public.

“She doesn’t understand what it means to be in real danger… Not someone talking to you on the Internet, but actually having bullets shot at you,” a representative from Veterans for Peace told TMZ. “I’ve gone to war and had that kind of fear. She’s not in a situation where she can compare the two. She hasn’t had to fear for her life and not know whether she’d make it home.”

Cindy McCain, wife of Sen. John McCain — who was nearly killed when his plane was shot down during the Vietnam War — also expressed her disgust on Twitter.

Gweneth Paltrow is a joke. Her life is like taking bullets for a soldier. What a joke! My 2 sons serving in the military should talk to her.

Perhaps Gweneth Paltrow should go out on patrol with some soldiers. Kind of like a Red Carpet in her mind I guess!

Gwyneth previously created controversy by implying her job is tougher than those of working moms with regular schedules. She later tried to clarify her statement and said people need to be less critical of each other… It would just be much easier to do that if she stopped the “woe is me” act and gained a bit of perspective.