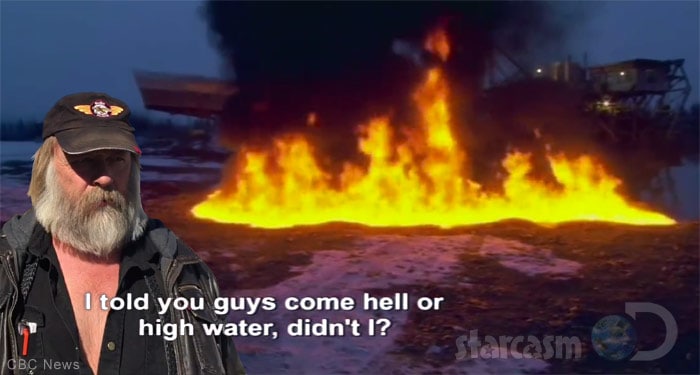 Gold Rush‘s lovable bearded profanity factory Tony Beets looks to be in a bit of hot water this week, after he created a bit of literal hot water on screen by allowing his dredge pond to be doused in gasoline and set on fire.

Tony was in Yukon Territorial Court after the on-screen incident led to him and his company being charged under the Yukon Waters Act. The law-breaking scene aired in early 2015, and featured one of Tony’s employees pouring gasoline on the small body of water used by his famous mining dredge before another man set it on fire.

The narrator referred to the incident as a “Viking Baptism.” And after the pond was ablaze, Tony could be seen in the foreground declaring “There you go,” adding, “I told you guys come Hell or high water, didn’t I?”

As you can tell in the clip, it isn’t actually Tony who pours the gas or sets the blaze. The man who poured the gas was Mark Favron, who testified that the stunt was his idea after pleading guilty and paying a $1,725 fine. According to CBC News, “He said he asked Beets if it was OK, and Beets ‘didn’t give a f–k.'” That sure sounds like Tony.

And speaking of sounding like Tony, he spoke with CBC News about the incident in a video interview outside the courthouse:

What I make of this case is, I mean, there was fuel spilled — there’s just no question about it. So then, once things get in process, you know, you’re gonna land up in court. Things have to be done that way.

But, you know, basically storm in a teacup — that’s what it is. We poured a gallon, maybe a gallon point 5…somebody poured it on the water, and that man has been fined for that and I guess I didn’t stop the man. Since I am the man running the show, I guess I should have been a little bit more, and told him not to do it. However I didn’t do that, so here you are in court, so take the fine. Next time, don’t go there. It’s kind of a joke gone bad, right? 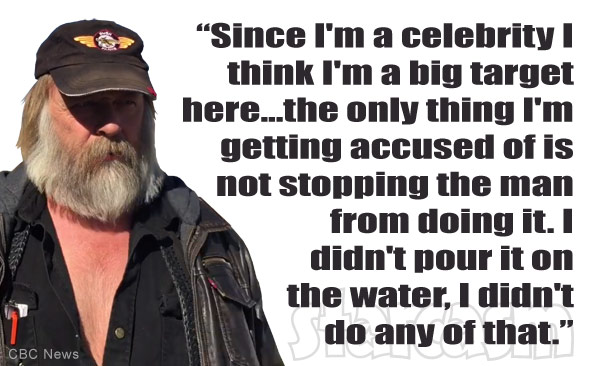 But since I’m a celebrity I think I’m a big target here, I don’t know. I don’t know what way the wheel moves, but once you get accused of something like — the only thing I’m getting accused of is not stopping the man from doing it. I didn’t pour it on the water, I didn’t do any of that.

Robert Savard, the Yukon’s chief mining inspector, says that Tony’s celebrity status had nothing to do with his persecution beyond the fact that the incident was aired and that’s why it was reported. From CBC News:

[Robert Savard] said the compliance branch in Yukon’s Energy, Mines and Resources department occasionally receives complaints about the mining operations shown on television. Sometimes the activities in question are routine operations, others are a concern, Savard said.

Tony’s Gold Rush co-star Todd Hoffman can probably sympathize with Tony, as his company, 316 Mining, was found guilty of violating the law with its Colorado mining claim earlier this year. However, Todd’s offense was a LOT more serious than setting a dredge pond on fire.

The Situation sued for his addiction to prescription drugs