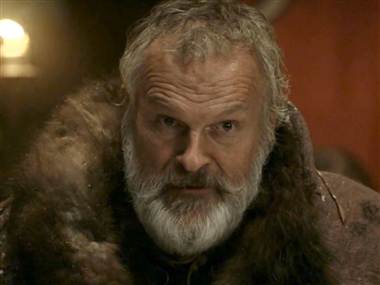 Clive Mantle, who plays Greatjon Umber on HBO’s Game of Thrones, recently got his own taste of a little medieval roudyness. His character got two fingers bitten off by a direwolf on the series, and in real life he got the top part of his ear bitten off by a Scotsman.

55-year-old Mantle confronted two 32-year-old Scotsmen who were being too loud early Sunday morning at a Travelodge in Newcastle, England. According to his agent, Bryn Newton, this is what went down:

“On the first occasion, he’d said ‘can you keep the noise down please?’. He was very polite. It was 4.30 in the morning and he was very tired. He returned to bed but when he went back outside there were two drunken Scotsmen. He said to them ‘If you don’t keep the noise down I am going to call security’. That’s when they set about him. Even though he is a big guy they got him on the ground.”

He IS a big guy, coming in at 6’5’’. Thankfully, someone else heard the commotion and called the police, and Mantle was able to get to a surgeon in time to reattach his ear.

“One of them bit the top part of his right ear off. It was savage.