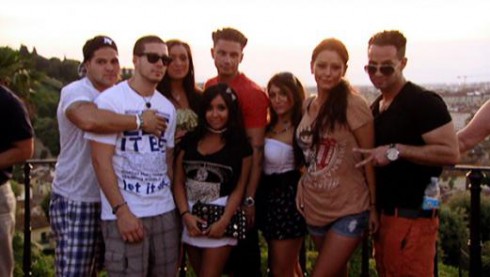 The Jersey Shore stars’ salaries have always been a topic up for debate. These kids seem to have it made! They get to go on vacation a few times a year and party with friends for a couple months at a time. Most people have to pay for vacations, not the other way around!

Although they don’t all make the same amount, one thing is for sure – it pays to party for these guys! According to Radar Online, Snooki, The Situation, and DJ Pauly D are the top earnings, getting paid $150k for each episode of season 6! On average, there are 12 episodes per season. That adds up to a whopping $1.8 million! That’ll but pregnant Snooki plenty of diapers and formula.

Oh! Did we mention that they also get a $400,000 sign-on bonus and a $200,000 check at the end of the season, too? That rings their total up to $2.5 million. The other members of the cast get bonuses as well, but their pay is significantly less.

Snooki’s BFF and spin-off co-star, Jenni “JWoww” Farley, brings in about $100,000 per episode and Vinny Guadagnino makes $90,000 per episode! Fans may recall that a homesick Vinny left Seaside Heights during the fifth season after his anxiety level became unbearable. He missed 3 episodes – that means his trip home cost him nearly $300,000!

On-again, off-again couple Ronnie Magro and Sammi “Sweetheart” Giancola make $80,000 per episode each. No word on if they get bonuses for every time they make-up and break-up.

Last but not least is Deena Cortese, who joined the franchise during its third season. She is only getting $40,000 per episode but as you’ve surely noticed, she’s been making headlines for her recent drunken arrest. She looks to be following in Snooki’s footsteps and judging by Snooki’s paycheck, that’s not a bad idea. Surely, Deena’s arrest will make her more valuable to producers! In the world of Jersey Shore, arrrests = ratings!

Let’s also not forget that the entire cast are capitalizing on their own business lines. Snooki alone has enough product lines to make a guido dizzy! From bronzer to books, girl is raking in the cash to spoil her little pickle-on-theway.