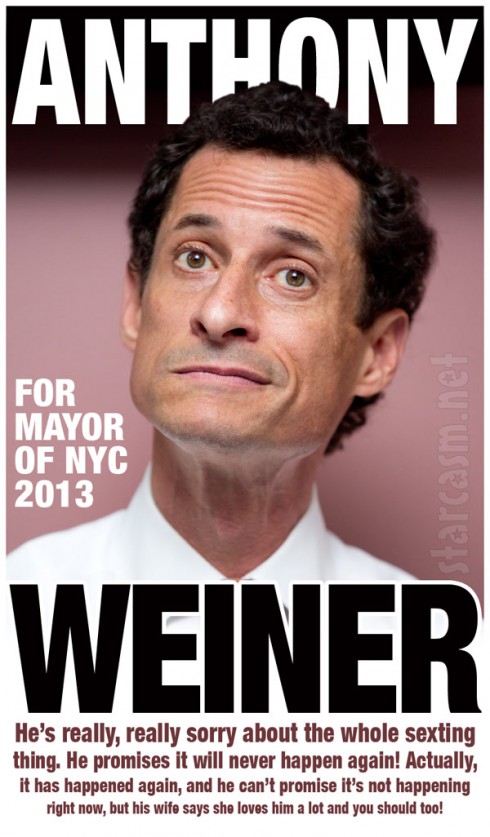 New York City mayoral candidate Anthony Weiner’s poll numbers have taken a dive since the most recent sexting scandal involving 23-year-old Sydney Leathers broke a couple weeks ago, with a Quinnipiac University poll released Monday showing him dropping ten points to the abysmal fourth place rating of 16% — well behind leader Christine Quinn (27%), Bill de Blasio (21%), and Bill Thompson (20%). Despite the bad numbers, Weiner is not pulling out (yes, I just wrote that) because quitting “isn’t the way we roll in New York City,” Weiner said.

I’m no expert at running a political campaign or anything (although I did watch every season of The West Wing and feel I am in touch with my inner Josh Lyman), but I think it’s time Anthony Weiner stopped fighting against the current and swim with it instead! I suggest he embrace the latest scandal and his Adventure Comics alter ego and officially run as… 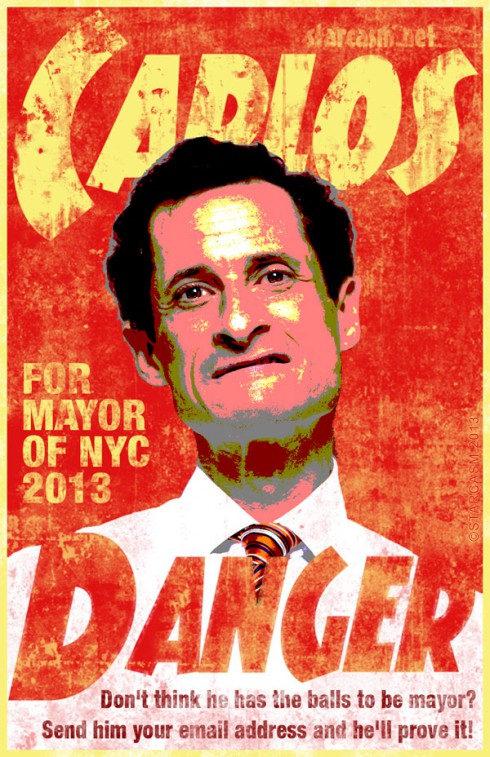 To prove my point, here are what the two campaigns look like side-by-side: 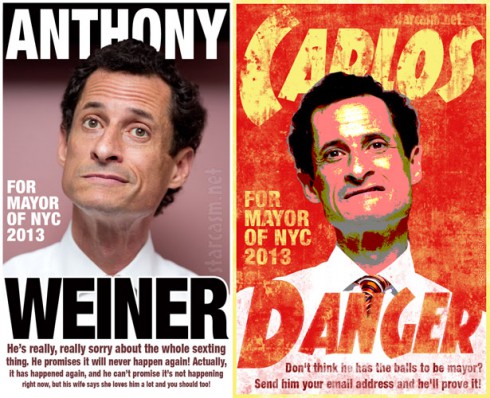 Sure, he’ll lose a lot of votes, but how could he not gain more than he loses?!? The voters want confidence! And a little brashness and flair can’t hurt, right? This is The Big Apple we’re talking about here! And besides, this is all just a power play for the biggest office in the land anyways. What Carlos Danger needs to focus on now is coming up with a name for his junk because that has to be Danger’s running mate int he 2016 presidential election.

My inner Josh Lyman has already come up with Carlos Danger’s presidential campaign commercial. It starts off with photos and clips of whoever else is running with all their wussy little causes and soapboxes. Then, an abrupt cut to Carlos Danger in an exact remake of the infamous Scarface scene as Carlos begins to unzip his pants and says, “Say ‘ello to muh lil frenn!” As he unzips there are explosions or whatever. (Maybe bald eagles and jet planes fly out? Maybe rainbows and unicorns too? I dunno — the ending may need some work.)

And speaking of The West Wing and Anthony Weiner, actress Kristin Chenoweth looks ready to reprise her role as assistant to the Vice Presidential Candidate, Annabeth Schott! Check out her musical ode to Carlos Danger’s lil frenn from last night’s episode of The Tonight Show With Jay Leno:

OK, it needs a little fine tuning to make it somewhat more “pro Danger,” but she’s on the right track. Can’t you feel the momentum building? Carlos Danger for President 2016!