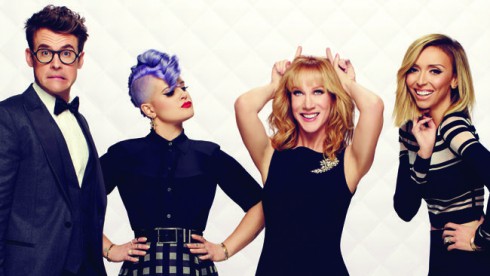 In the wake of Kelly Osbourne and Kathy Griffin’s sudden departures from Fashion Police, E! is putting the show on the shelf until September. The next episode was previously scheduled for March 30.

“We look forward to taking this opportunity to refresh the show before the next awards season,” E! said in a press release. “Our talented co-hosts Giuliana Rancic and Brad Goreski, along with Executive Producer Melissa Rivers, will continue their roles as we evolve the show into its next chapter for the legions of Fashion Police fans around the world.”

Following Joan Rivers’ death last September, the show was just beginning to regain its footing during the awards season. However, after an ill-conceieved joke from Giuliana about 18-year-old Zendaya’s hair, Kelly threatened to quit the show if they didn’t “make it right.” Although Giuliana apologized on air and on social media, Kelly’s departure was announced days later. There are mixed reports about whether she was released or quit.

As talks quickly turned to who could fill the role, it seemed the show would go on as scheduled… Until Kathy tendered her own resignation last week. In a long statement, she said she took issue with Fashion Police‘s format and style.

“My brand of humor, while unrepentant and unafraid, is all about CONTEXT,” Kathy said. “Listen, I am no saint…But I do not want to use my comedy to contribute to a culture of unattainable perfectionism and intolerance towards difference.”

When confirming Kathy was leaving the show, E! said the next episode of Fashion Police would air as scheduled on March 30. It seems they later reconsidered and decided to push it way back to September.

Do you think Fashion Police should return at all?

Giuliana and Bill Rancic’s baby is due any day now!