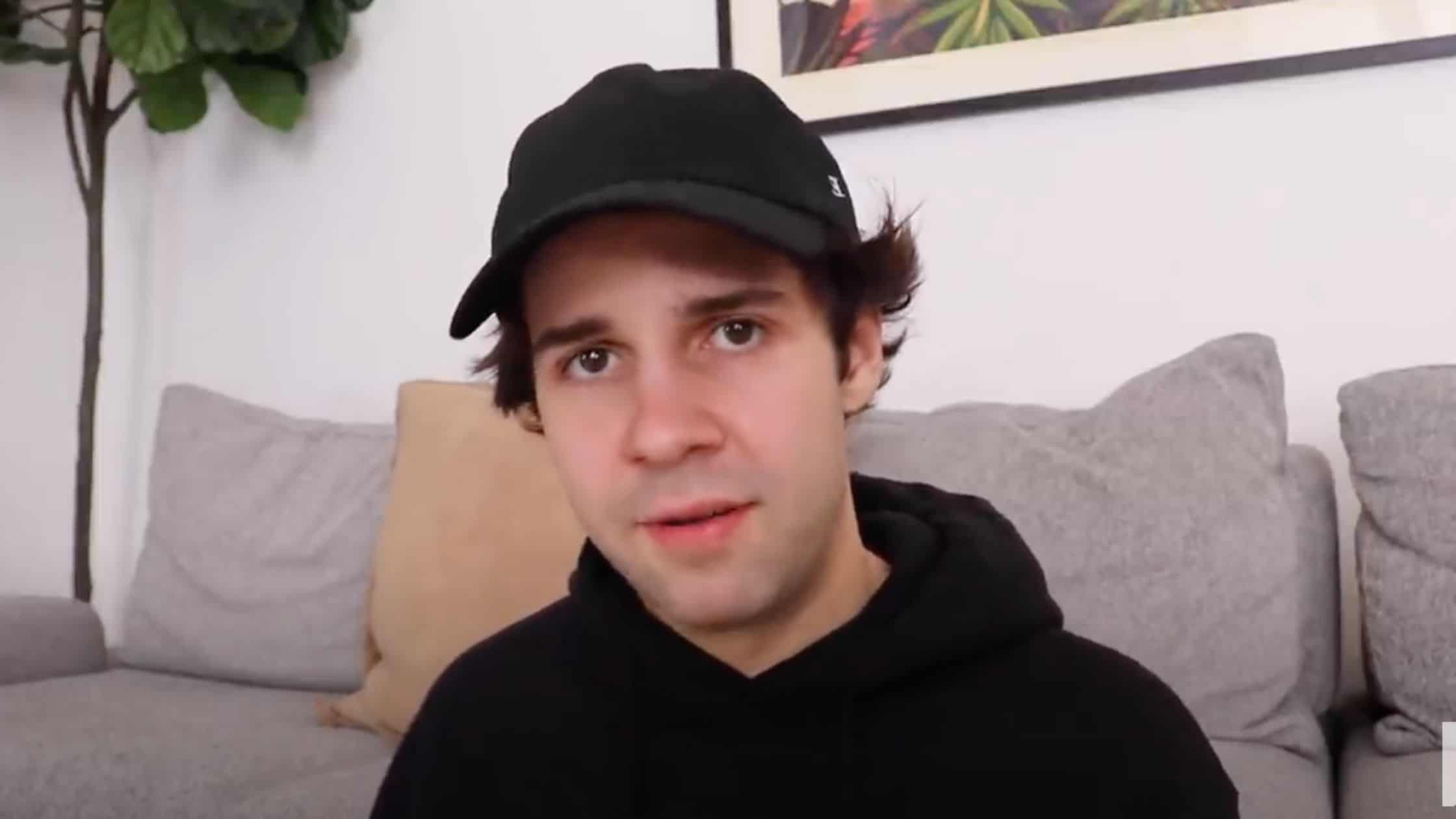 Monday night David Dobrik released a more direct and detailed apology on his main YouTube channel than the one he released last week on his less popular VIEWS channel.

His first apology was released March 17, 2021 directly after a Business Insider article went live about a 2018 vlog he released featuring a coerced threesome between “Durte” Dom Zeglaitis and two young women. One of the women was blackout drunk during the activity, which makes it r*pe, and she states that she was supplied with alcohol by the group. Furthermore, David went on to turn her trauma into content and jokes. David’s initial apology did not directly address this, and it was only 2 minutes and 30 seconds long. However, though it appears more genuine on the surface, it must be noted that this second apology comes on the heels of a huge income and career loss for him. David Dobrik took down the vlog that featured these disturbing events in 2019 after the victim asked him to, which means he has known of her discomfort for at least two years but has only spoken out about it and expressed regret about it now.

In the fallout from the article, David has been losing YouTube subscribers, and has lost sponsorships from a multitude of brands, including SeatGeek. David has also mutually “parted ways” with the social media app Dispo he recently launched. Angel City FC, the women’s football team he cofounded with Natalie Portman, also severed ties from him.

The latest video is titled “3/22/21,” is over seven minutes long, and includes an on-screen trigger warning of “multiple forms of trauma including r*pe and SA.” Right away the vibe is different than the first video. The camera is close, and he is in a home environment instead of his podcast studio. Both his voice and body language are more open this time. This can come across as more genuine for sure, but it also must be kept in mind that David Dobrik has built an empire on emotional manipulation.

“I don’t want to defend that video. I don’t want to delete that video. I just want to be clear,” he goes on. “What this video isn’t going to be, is it’s not gonna be me discrediting Trisha or any other woman involved.” The fact that David actually said Trisha’s name is incredible, as ever since her explosive breakup with Jason Nash, her name has not been publicly uttered by almost anyone in the group (aside from when Jeff Wittek recently defended himself against her claim that he bought alcohol.)

David goes to say that he “fully believes the woman that came out against Dom.” He then goes on to say that the day after the r*pe occurred, he got consent to post the video. Still, he now sees that he “should have never posted it.” His voice starts to break as he says this part, perhaps indicating genuine regret.

David goes on to explain that what he didn’t understand at the time, but what he now understands is “that she sent that text [of consent to post the video] because she felt she had to, not because she wanted to. And that’s f**ked up, and I’m sorry.”

David says when she reached out to him months later to ask him to take it down, he did so. “I want to apologize to her and her friends for ever putting them in an environment that made them feel like their safety and values were compromised.” This is a direct apology and examination of the issue at hand that accepts personal accountability and gives details about what he’s apologizing for, compared to his previous apology where he simply said he was disappointed in some of his former friends, like Dom.

“I was completely disconnected from the fact that when people were invited to film videos with us, especially videos that relied on shock for views, or whatever it was, that I was creating an unfair power dynamic. I did not know this before. It was completely wrong, and I wish I was more responsible, and I wish I was more aware at the time, and I’m so sorry I missed that,” David says.

This part seems a bit odd, because there have been multiple times over the years when David made clear he knew he wielded power over his friend group and strangers. In fact, his ability to use power to generate emotional content is his forte. Sometimes the emotional content is shocking or fueled by fear (he loves to blindfold people and scare them with animals or things that they have a genuine phobia of, as was the case with the then 17-eyar-old Emma Chamberlain,) or excitement and joy. Whether he is convincing his friends to get into dangerous circumstances, like getting so drunk they hurt themselves or giving someone a Tesla or cash, the motivation behind everything is to elicit extreme emotion from the audience. He pairs these extreme moments with a constant stream of loud laughter and popular, emotionally-charged music. Although he usually had sponsors, and merch, when he was making vlogs on YouTube they were not monetized by YouTube’s advertising system so he could use copyrighted content and showcase extreme behavior without worrying about breaking the rules of YouTube’s Adsense program. The bottom line is that David was very familiar with the power he wielded over others while making these vlogs, it’s just that at the time he didn’t have the empathy to understand what the consequences could be for the individuals that he used as subjects in his vlogs.

In the below tweet is audio from David’s Views podcast where he discusses the night in question. Durte Dom was apparently upset about the face that none of the five girls he had brought into the apartment wanted to engagement in sexual activity, but David gave him a “pep” talk to help Dom find the motivation to continue his quest. While thre of the girls lft the apartment that night, one of the two girls who stayed got so drunk that she was unable to consent to what happened that night.

PODCAST ARCHEOLOGY: David Dobrik discusses how he coached Durte Dom into having the “3-some” for a bit in his vlog. David says Dom was initially frustrated because he wasn’t able to convince the girls to go with him, but David says after his pep talk, Dom was successful. pic.twitter.com/nE7RHQ50oa

“People felt that they had to be silent for the sake of my video, and that’s not right, and it’s f**ked up, and I’m sorry,” David goes on in his apology video.

“I also want to acknowledge the women that spoke out against Dom in 2018. I’m talking about Ally, and I’m talking about other girls that addressed their problems. I’m sorry that I didn’t listen to you guys. I’m sorry that I took Dom’s word for what happened in those certain situations and I didn’t believe you. And not only did I not believe you, but I made a joke of what kind of a person Dom was because I could not wrap my head around a childhood friend of mine doing this to people and actually hurting people, and I’m sorry for that. Not only did I discredit you, Ally, but I platformed Dom. And not only did I platform Dom, but I platformed the subject of SA in a negative way where I made jokes about it and I reinforced that kind of behavior. And I’m so sorry and I really let, not only you down, but a lot of people down: a lot of people that watch me and my friend and family for that.”

David is talking about Ally Hardesty, who actually put out a video about Dom in June of 2017. Full video below.

David goes on to say that he decided to stop filming with Dom in 2019 because that’s when he first started to understand the power dynamic. But he acknowledged that while he “moved on” and “grew” at that time, at that time he did not reach out and apologize to anyone who was hurt from that behavior.

Edit: even though he no longer included Dom in his vlogs in 2019, he continued to appear with Dom, including in one of Dom’s vlogs, into 2020.

David goes on to apologize again and announce that he’s taking a short break from social media. He wants to have an infrastructure of checks and balances and HR before he returns to content creation, which he wants to do because he loves what he does. David says he wants to prove that “change is possible.”

Ally Hardesty, who spoke out about Dom’s behavior in 2017 only to be ignored and silenced, retweeted the below tweets about the situation:

The first tweet reads “david dobrik said he couldn’t wrap his head around the fact that his childhood friend was an assaulter and that’s literally the problem. men will ignore and discredit women but won’t hold their besties accountable :)”

The second one reads “reminder : its the victims who are allowed to “accept” david dobrik’s statement video.”

Trisha Paytas, for one, definitely does not accept David’s apology. “As someone who had a traumatizing week Jan 29 2019-feb 5 2019 due to David putting in 2 bits in 2 vlogs involving me that I specifically told him not to put in – I don’t forgive him. He ignored me at the time of the trauma and kept the videos up/ ignored me for 2 years,” she tweeted shortly after David’s second apology video about the situation went live.

She did say that she was glad he’s acknowledging things now, but pointed out that “It took losing all his sponsors for him to say something – and that speaks volumes.”

While on the surface, this second apology seems more sincere, there are many moments when it is still misleading and shifting blame and seems motivated by facing real career consequences for his actions.

One person who has been hurt by David Dobrik in the past has accepted his apology. Big Nik tweeted that David had personally called him and apologized. He added that he believes David aplogy video is sincere. 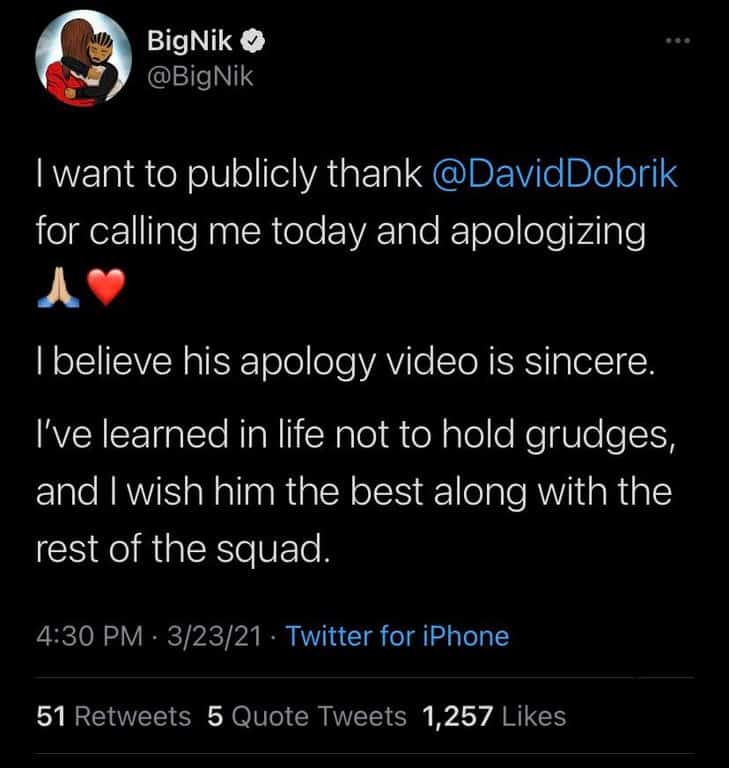