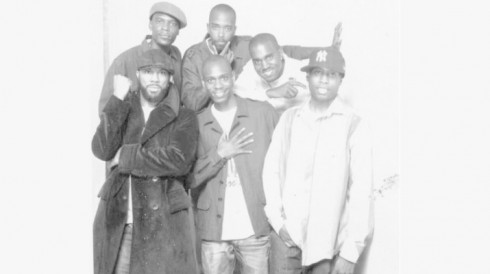 After already joking with David Letterman about his abrupt departure from his TV show years ago, Dave Chappelle had some more stories for his Friday the 13th appearance on The Tonight Show with Jimmy Kimmel, including the moment he knew Kanye West was gonna be a big star.

“It was like Mohammed Ali in Olympic Village. He just knew he was gonna get the gold,” Chappelle says of the unknown Kanye West back in 2003. Kanye’s first television appearance was actually on on Chappelle’s Show, and later West hung out with Chappelle, Talib Kweli and Common to listen to Jay-Z’s The Black Album . “Jay Z says on the record, ‘Kanyeezy, you’s a genius. You did it again,’ and Kanye stood up — first time he spoke all day — and said, ‘Stop the record and rewind THAT,'” Chappelle revealed.

Later while they were going over edits of the show, Kanye got a call. According to Chappelle he told the caller, “No, I can’t. Because I’m at the edit for the Dave Chappelle show watching sketches that no one has seen before, cause my life is dope and I do dope sh!t.” And that, my friends, was the moment Chappelle knew Kanye was was gonna be Kanye. His bravado has always ran particularly deep.

Dave Chappelle and Jimmy’s house band The Roots have deep roots themselves. “I was in Portland, Maine, and I was walking in a mall, and I guess you guys had been there an hour before me, so I guess they thought I was a lost Root,” he quipped. Later Chappelle checked out their show and forged a relationship.

Chappelle has nine shows at the Radio City Music Hall in NYC June 18-26. Hopefully a new TV show is also in the works.