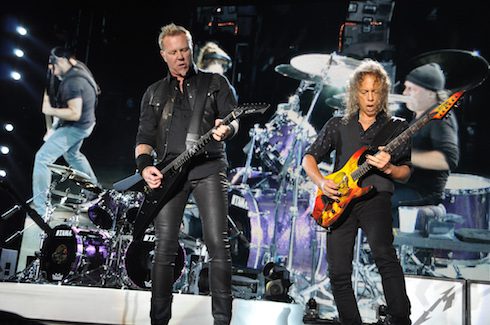 UPDATE #2 (2/26 9:51 AM) – The complete North American itinerary for the Metallica tour 2018 and 2019 has been confirmed by the band. We got about 98% of the cities and venues correct 🙂 Ticket info can be found here. The full list of dates and venues is below:

The next leg of the Metallica tour 2018 is coming — and, thanks to the wonder of social media, we know both that they’re headed back to North America *and* the cities and venues where they’ll be playing.

Friday afternoon, Metallica’s social media accounts all shared a short clip, with stylized text matching that of Hardwired to Self-Destruct, the band’s most recent album. By Sunday, the clip had been updated to include the words “Worldwired Tour”:

Within a few hours of the original post, almost three dozen different venues around the U.S. and Canada had shared either the exact same message or a stylized variant featuring the clip appearing on that venue’s scoreboard. So, while nothing’s official yet, it seems a pretty safe bet that Metallica’s next stop will be back in North America, where they last toured in stadiums during summer 2017.

Here’s a complete list of the 33 cities and venues currently teasing the Metallica tour 2018, with a link to each teaser embedded in each venue’s name:

In addition, Live Nation Detroit and Live Nation Los Angeles both shared variants of the “Monday” teaser that have since been deleted. If Monday’s announcement confirms shows in those two cities, the total number of North American gigs for the Metallica tour 2018 would come to 35 (assuming one night each).

Given that frontman James Hetfield recently reaffirmed the band’s pledge to play no more than 50 shows per year “for [their] health,” plus the fact that Metallica already has 24 shows confirmed or on the books for 2018, the 33 dates above seemingly represent the band’s last gigs of the year. Sorry, South America and the Pacific Rim 🙁

In any event, we’ve still got to wait for Monday for official word. Here’s something to help you pass the time: