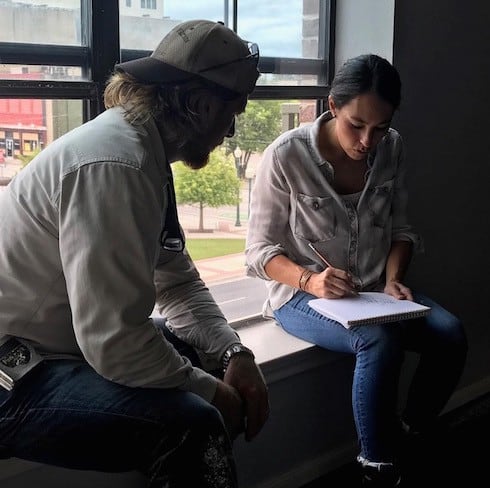 Speaking of Texans deciding to help each other out, here’s a happy story out of Waco. Not long after the first images of devastating flooding in Houston began making their way across the internet, Fixer Upper‘s Chip and Joanna Gaines put their heads together and came up with a quick, easy way they could help out–and enlist their millions of fans. Just like they did with #DEMODAY and “Garden Mama” and countless other slogans before them, the pair came up with a quick slogan, slapped it on a T-Shirt, and put it up for sale on the Magnolia Market site.

From there, news of the Fixer Upper Texas Forever shirt spread quickly–a little too quickly, in fact, because then this happened:

Jo and I don't know what to say…the past 24 hours, you all have jumped in and purchased over 35,000 Texas Forever shirts! We are going to keep this going until September 30th so you still have time to grab one. 100% of the proceeds from every shirt are going to help rebuild Texas cities affected by Hurricane Harvey. And just a heads up: because of the AMAZING response our shipping times will be delayed. Your involvement will make a difference, so help us spread the word! #TexasForever #HurricaneHarvey (link in profile)

That’s right: the Gainses sold a whopping 35,000 shirts within the first 24 hours of availability. At $26 each, that’s a grand total of $910,000 in Hurricane Harvey disaster relief from the very first day. Since the shirts have been selling at a rate of over 1,400 per hour, and since Chip shared the above update 13 hours ago, it seems a very safe bet to say that Fixer Upper Texas Forever shirt sales are by now well past the $1 million mark.

If you’d like to purchase a Fixer Upper Texas Forever shirt for yourself, you can do so right here. (In case you were wondering, the shirt doesn’t actually say “A Shirt With A Purpose,” which is to its benefit–but it also lacks the Texas outline, which is kind of a bummer. Still: charity!) Chip and Joanna haven’t said exactly which charity or charities the money will be going to, but, since the shirt is on sale until the end of September, it’s possible that those details are still being worked out. We’ll update the article when the Gainses make an announcement.