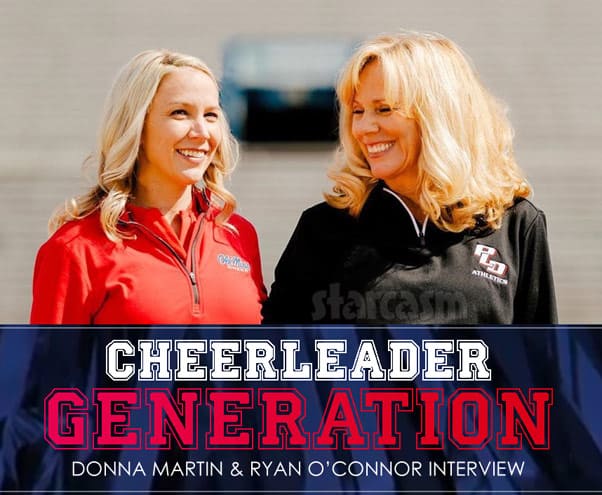 Cheerleading coaches Donna Martin and Ryan O’Connor are the central figures of Lifetime’s new reality series Cheerleader Generation. Donna is a legend in the world of high school cheerleading, having coached at Paul Laurence Dunbar High School in Lexington, Kentucky for more than 30 years, where she won eight national titles. Four of those national titles were with a squad that included her daughter Ryan, who would follow in her mother’s footsteps by becoming a cheerleader coach herself. However, Ryan has opted to coach on the collegiate level, and she is now the coach at the University of Mississippi.

If Ryan and Donna seem familiar, that may be because they are no strangers to reality television. In what amounts to a cheerleader-themed take on the famous British Up series of documentaries that have been checking up on on the same group of grade schoolers every seven years since 1964, this will be the third time the mother-daughter duo will appear as part of a reality series on a major US cable network.

Donna and Ryan’s first reality show appearance was on MTV’s True Life. Their episode aired in early 2001 as part of the third season of the show, and it was simply titled: “True Life: I Am A Cheerleader.” Ryan was too young to be on the Dunbar High cheer squad for the True Life episode, but the same producer returned five years later and pitched a full series based on Dunbar cheerleading while Ryan was a sophomore member of the squad. That would eventually turn into Cheerleader Nation, an eight-episode show that aired on Lifetime from March to May of 2006.

Fast forward 13 years and both Donna and Ryan are back on Lifetime again for Cheerleader Generation, premiering Tuesday night at 10/9c. Here is the billing for the new series, which will have ten one-hour episodes during its inaugural run:

Set in the exciting world of competitive cheerleading, Cheerleader Generation follows the lives of two squads and their fierce, hardworking coaches, Lexington Kentucky’s Dunbar High School coach Donna Martin and her daughter, Ole’ Miss head coach, Ryan O’Connor. While veteran coach Donna pushes her team to new heights to return Dunbar to its former glory of reigning champs, Ryan is fighting to earn the respect of her peers, her collegiate team and her mother. The stakes are high as Donna and Ryan also compete to be the first ever mother-daughter coaches going after national championship titles in the same year while dealing with the real-life drama of college students trying to find their independence, high-school students trying to survive adolescence and their mothers who are trying to keep it all together too.

Donna and Ryan have been kind enough to take the time to talk with us about a series of topics relating to the show and their different experiences in the world of competitive cheerleading.

This dynamic mother-daughter duo talk about what they've learned from each other. Catch them and their squads on Tuesday at 10/9c on the premiere of #CheerleaderGeneration. . . . . . #cheerleading #cheer #olemiss #dunbarhighschool #tv #lifetime

DONNA: I feel like I have a little more experience with all kinds of situations. I feel like I probably give kids more chances where Ryan is more strict. Of course kids are younger in high school and some situations may be more on the parent than the child. Ryan is coaching adult students who should not be relying on parents with regard to cheer.

RYAN: One of the biggest differences between my mom and I as coaches is that I am still able to physically do some of the skills I am teaching or I have done them in the past. I think my college kids respect the fact that I have cheered and competed at the highest level of our sport. I think this allows me to be more black and white than my mom at times.

RYAN: When I left my first job as a magazine editor, I knew I wanted to making coaching my full-time career. Unfortunately, coaching a high school team isn’t a full-time job in pay (it certainly is in time) and being a college coach is. The first coaching job I applied for was at the University of Alabama at Birmingham. I was lucky enough to get this job at a young age and continued to move up to an SEC school after 3 full years. While I was coaching at UAB, I coached a competitive high school program in Alabama and I loved those girls! I still enjoy the college experience more than high school because I think those were the years that truly helped me become who I am today. I enjoy working with students in the 18-23 year old range where they are starting to discover their purpose and who they want to be as an adult.

DONNA: I was a Biology teacher first and coach second. Coaching pays less than teaching. I have never thought about going anywhere else. 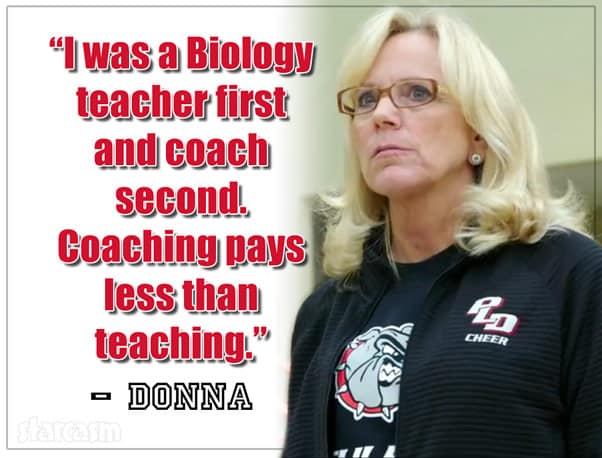 DONNA: Hopefully people will understand that the journey of cheerleading is way more impactful to the lives of these kids than the outcome of one particular competition. I want people to understand that passion for things in life can bring you relationships similar to that of a family. You learn to love and respect each other while you struggle to achieve common goals.

RYAN: I hope that the show only has a positive impact! I think the audience will all find someone on the show that they can connect to, whether it’s a high school student dealing with divorced parents, a college student trying to make his grades and overcome is upbringing, or a mom and daughter who live far apart and are adjusting to that life! We all have a story to tell and cheerleading just happens to be the one thing that brings us all together. I hope people will see how hard these kids and their coaches work and how much cheerleading can truly teach you about life after high school or college! 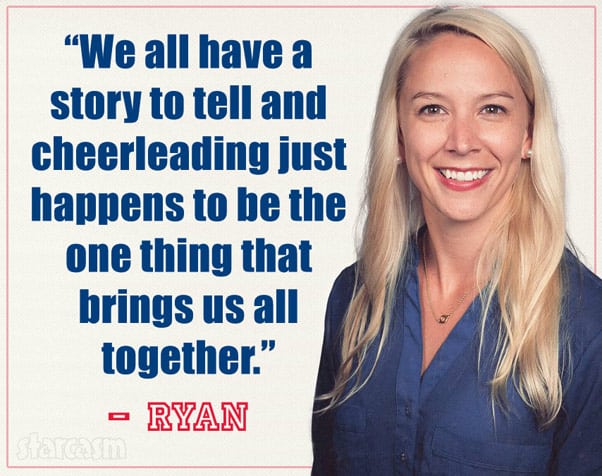 RYAN: Honestly, how cruel the world can be these days. I think it is very easy to place blame and point fingers instead of having grace for others. I think sometimes people need to realize that we are all human, we all make mistakes and we all have something going on deeper under the surface. I pray that the audience will choose to love my students the way I do and invite us all into their homes each Tuesday night!

I think my biggest fear is that people will not understand why I coach and that the kids mean more to me than winning anything. I hope that they see we are teaching way more than cheer.

Ryan, you recently welcomed a baby boy. How did being pregnant impact your coaching this season?

LOT! Certainly a lot more than I ever thought it would. I got really sick at three football games in the fall due to dehydration too. After that last time, I realized I really needed to take a step back and do a little less. This made me feel like a lesser coach. I love to be in the action – up close and spotting stunts – but I had to sit down at times (which is the WORST for me), take breaks and drink a lot of water.

Donna, you’ve been coaching fore more than three decades. What is the Dunbar High School cheerleader alumni family like? Are you still in close contact with a lot of your former athletes?

DONNA: Those thirty-year-old relationships make it hard to ever step away. I am close with many former cheerleaders and have coached second generations . They are my extended family. When my son was diagnosed with leukemia, the cheerleading family was my huge family of support. I love them.

Thanks again to both Donna and Ryan for taking time out of their incredibly busy schedules to talk with us! Be sure to tune in to Lifetime Tuesday night at 10/9c for the series premiere of Cheerleader Generation!