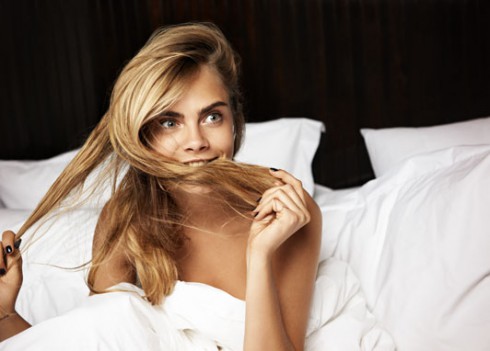 It’s no secret that model Cara Delevingne is dating actress Michelle Rodriguez, and now she’s speaking out about why sexuality shouldn’t be a big deal.

21-year-old Delevingne was exhausted after her sister Poppy’s five day wedding bash in Marrakesh, so she invited a Telegraph reporter in her bed to do an interview. When the topic got her openness about social media (she once posted a hers and hers Instagram photo of herself and Michelle Rodriguez’s arms hooked up to IVs, presumably after a hard night out,) and sexuality, her PR person tried to steer the questions another way. Cara, however, was undeterred. “What do I think [about sexuality]? I think people shouldn’t be scared of that. I’m young, I’m having fun, I don’t want to pretend to be something I’m not.” She shrugs. “So I don’t really care on that matter. People can say what they want, but I’m having a good time. I know what people are doing who are my age; I just think it would be a lie to pretend that I’m not having a good time.”

It’s definitely no secret that the popular model with a massive Twitter account is having a good time. She is frequently spotted living it up with party girls Miley Cyrus, Kate Moss, and Rihanna.