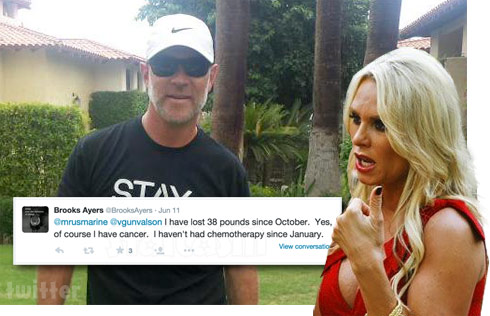 This season of The Real Housewives of Orange County is yet another emotional and dramatic roller coaster, as The OG of the OC Vicki Gunvalson assists her boyfriend Brooks Ayers in his battle against stage three non-Hodgkins lymphoma.

That’s the emotional part of the ride. The drama comes from Vicki’s co-stars Tamra Judge and Meghan Edmonds, who have publicly stated that they are suspicious that Brooks doesn’t even have cancer!

Either way, Brooks appears to be doing well, judging from this photo that he tweeted over the weekend:

In the picture, Brooks is wearing a “Stay +” shirt from Stay Positive Apparel. The company was co-founded by non-Hodgkin’s lymphoma survivor CJay DiPrima, who got involved “with the hopes of spreading a bit of positive thinking to those who need it most.”

However, as I mentioned above, not everyone is remaining positive about Brooks’ cancer diagnosis. In an interview with Perez Hilton, Tamra judge spoke at length about her suspicions regarding whether Brooks has cancer or not.

“When it comes to Brooks it’s a touchy subject because you never in a million years want to think that someone you know is lying about cancer,” Tamra says. “How it all plays out is very suspicious, and it just makes you want to think, ‘Is he telling the truth, or is he not telling the truth?’ At the end of the day, nobody really knows except for him and a doctor.”

Here is the full interview:

New Real Housewives of Orange County cast member Meghan Edmonds was quick to toss in her two cents as well, and she was a bit more straight forward about it than Tamra. “I think he’s faking his diagnosis,” Meghan bluntly told Star of Brooks earlier this month. Meghan thinks that fans will also be suspicious after watching this season. “I believe the little questions that unfold will intrigue the audience.”

Meghan also reveals that she is familiar with dealing with someone battling cancer. Her husband’s daughter Hayley has moved in with the couple as Hayley’s mother, Lee Ann Horton (Jim’s first wife), struggles with the disease. “Hayley, who you’ll see a lot on the show, moved into our house because her mother’s sick and undergoing chemotherapy,” Meghan said. “I haven’t talked to Vicki or Brooks since filming ended, but I’m dealing with a woman in my life who’s dying of cancer, and I know it isn’t anything to mess around with. I know that for certain.”

Over the past few weeks, Brooks Ayers has responded to the fake cancer accusations on Twitter, including answering questions about chemo and the fact that he never lost his hair:

@mrusmarine @vgunvalson I have lost 38 pounds since October. Yes, of course I have cancer. I haven’t had chemotherapy since January.
— Brooks Ayers (@BrooksAyers) June 12, 2015

@mrusmarine @vgunvalson Of course I am speaking the truth! What are you talking about? Why doubt and not encourage? This is serious!

@coffee6666 @mrusmarine Really? People respond differently to chemo, I did not lose my hair. How about being sick from chemo treatments?

@coffee6666 @mrusmarine You only see on what is aired on TV. I wish I was lying about having cancer, it’d be much easier. #maketodaycount

Brooks also addressed a couple of people openly asking about Vicki’s financial role in his treatment:

@TwinkSprink27 @junebergcarter @vgunvalson OMG! Really? I have my own insurance and have always paid for my own healthcare. #notcool #stupid

As fans of RHOC know, Brooks is looking into alternatives to chemotherapy to treat his cancer, and, judging from this tweet, it appears as though he may be turning to the healing powers of turmeric (aka curcumin):

I believe this to be true. People are so uninformed. #maketodaycount #Cancer http://t.co/JLAv4L2Fnu

You can follow Brooks’ story on new episodes of The Real Housewives of Orange County airing Monday nights at 9/8c on Bravo.

UPDATE – More tweets from Brooks about his cancer after this post was initially published:

@cgt58 We filmed at one of my doctor's visits. You don't know everything based on filming. We live it…everyday.

@rosiel99 @KrystinaK @mrusmarine @vgunvalson Not yet! I had tests run yesterday & am waiting on the results of my past 4 months of treatment

@coffeeaddict18 @vgunvalson Yes she has and does! She just went with me yesterday for more tests. She's very supportive and encouraging.

That isn't all that I do either. I have a complete medical team that oversee my regimen. #manufactureddramafortv https://t.co/KPiNKYH7vQ

@MeghanKEdmonds @Wildchildwendy @AllAboutTRH @vgunvalson Not true in MY case. My treatments were once every six weeks. Got Dr's clearance!