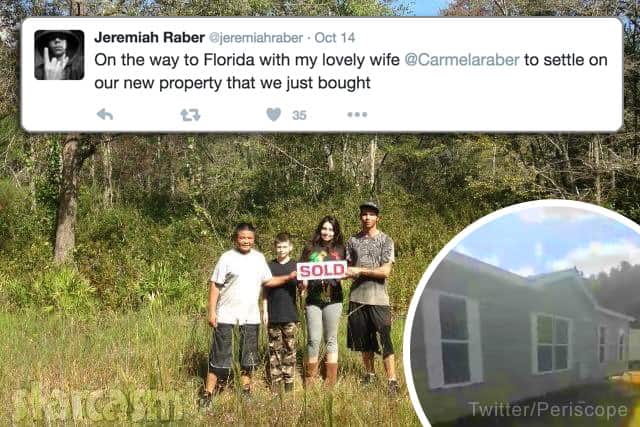 Breaking Amish: Return To Amish bad boy Jeremiah Raber shocked cast mates and fans this past season when he married 34-year-old Carmela from Vancouver, Washington after the two met via Facebook. Despite a few bumps in the road, Jermela is still going strong and recently announced they have bought a home in Florida!

Jeremiah first mentioned the move to The Sunshine State in a tweet on October 14:

Carmela followed suit with her own excited tweet, albeit less verbose:

After his announcement, Jeremiah has kept fans up to date via his favorite social media platform, Periscope. In a series of videos over the last few weeks Jeremiah has documented himself and friends clearing off the land they have purchased, and he even gave a tour of the pre-manufactured home he and Carmela purchased:

LIVE on #Periscope: 1 final look at the house b4 its on our property #jayber https://t.co/OSprsEXooa

During the tour, Jeremiah spills some deets about his and Carmela’s new mobile home, which is 1,525 square feet with four bedrooms and two bathrooms. I watched pretty much the entire clip and I have to say it looks REALLY nice!

Here are a couple of screen grabs from the video, including a look at their fancy kitchen: 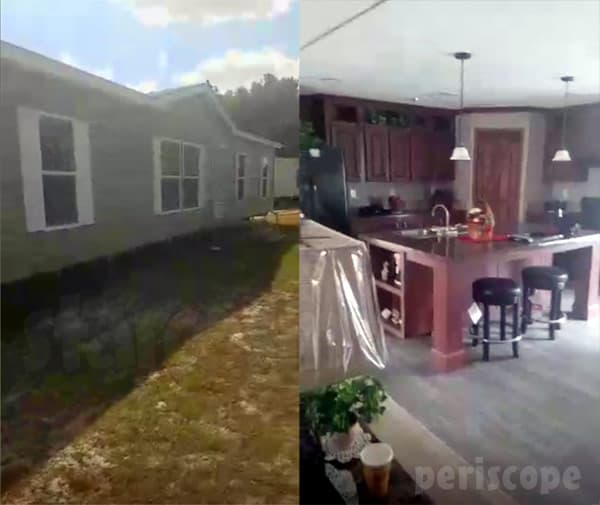 Jeremiah posted the clip on November 1 and said at the time that they plan to have the home on their property in two to three weeks. And speaking of the property, Jeremiah revealed that it is five-and-a-half acres. It’s unclear exactly where the property is, but they bought their mobile home from Freedom Homes in Lake City, Florida, so I assume it is in the Lake City area.

In non-home related Jeremiah and Carmela news, one Periscope viewer asked Jeremiah if there were any plans on expanding their family and Jeremiah left the door open! “Not sure if we are going to be adding to the family,” he said.

Speaking of Jeremiah and Carmela’s family, it’s unclear exactly how many of Carmela’s four children are making the move with their mom and stepdad. In the photo at the top of this post, we see two of Carmela’s sons posing on the land, so I assume they are there. Carmela’s oldest son recently had a child of his own, so I imagine he is still in the Vancouver area with the baby’s mother — although that is pure speculation on my part.

In addition to becoming a permanent Floridian, Jeremiah continues to be a Jeremiahntrepreneur by adding to his clothing line, writing a book about his life (with the help of a ghost writer), and pursuing his music career:

Now that I found someone to write my book now it's on to the next project. Music!!! #jayber

And in case you missed it, Jeremiah has been a fervent supporter of Donald Trump and equally fervent Hillary Clinton detractor throughout the election process. He pretty much summed up his take on Hillary supporters on Election Day:

The people votin 4killary R 1s that R either 2 lazy 2 work want everything handed 2 them 4 free don't keep up with politics, support killers

Carmela also seems to be anti-Hillary, but her reasons appear to be more religious and apocalyptic in nature:

Don't vote a woman president.. The end will come closer than u think.. I hear the sound of trumpets??? n 4:18

@aShLeYxoxo989 please forgive me I'm sorry if I offend you. It has nothing to do with emails.

@aShLeYxoxo989 no one knows. But there are warnings..

@aShLeYxoxo989 female ruler being one…

That's good!!! I'm all for empowering woman but it's deeper than that. @TVandMovieFan_

Something tells me that Carmela’s belief that a female ruler is a sign that the world is about to end comes from the Branhamism cult that she belonged to growing up because William Branham’s teachings were famously very misogynistic.

Despite the fact that it appears likely Hillary will be elected President and the world will be ending soon, CONGRATULATIONS to Jeremiah and Carmela on their new home and new life! They seem to still be happy together, and we wish them both more of the same! 🙂