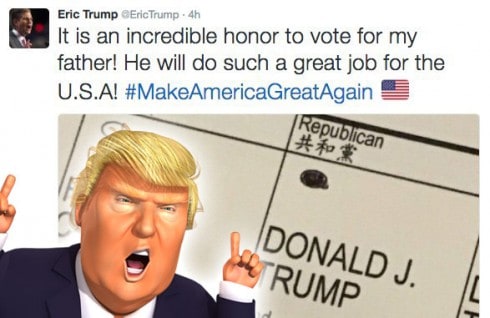 Donald Trump’s son broke the law in New York Tuesday by posting a photo of his marked ballot.

Eric Trump tweeted out an image of his ballot that included a filled in circle in which he showed that he selected his dad for President. He wrote, “It is an incredible honor to vote for my father! He will do such a great job for the U.S.A! #MakeAmericaGreatAgain.”

He was quickly notified that the sharing of your marked ballot is against New York election laws. He deleted the image shortly thereafter but the self incrimination was done. “A person who shows his ballot after it is prepared for voting, to any person so as to reveal the contents … is guilty of a misdemeanor,” according to the law.

The crime is a misdemeanor and is punishable by up to a $1,000 fine and a year in jail.

Be careful out there with your voting selfies y’all!