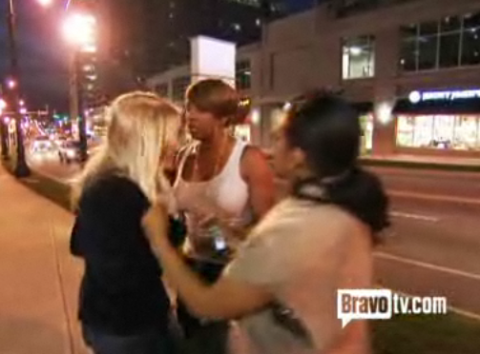 This episode picks up at last week’s cliffhanger when Kim stormed out of a restaurant during her “Kimtervention” with Sheree and Nene. Sheree and Nene followed, got into in the street, and then, the moment we’ve all seen a million times already, Sheree wraps her fingers around Kim’s Barbie hair and pulls. Kim jumps back and adjusts her weave (which is notably better looking than last season).

In interview Sheree claims that she never wanted to pull Kim’s wig off, she “just wanted to shift it a little bit.” I’m not sure about that. Anyone who dares touch Kim’s wig secretly wants to snatch the whole thing off to see what’s under there. I think what really happened was Kim’s weave was on a little tighter than Sheree thought, and she couldn’t get much traction before Kim pulled away. Kim’s got that thing secured with Gorilla glue.

Kim’s totally done with Sheree now. Like for reals, and I believe her. Once someone tugs at the poly-synthetic doll mess on her head, it’s the end. She also says that Sheree’s just angry because she didn’t get the settlement she wanted from Bob Whitfield.

Sheree says that Kim’s full of lies and needs medication.

The next day Kim calls in her friend Jodie from Birmingham, who drives up to see her because she’s only heard Kim cry twice before: When she got divorced, and now. Jodie must’ve been tipped to add that touch of drama. They  talk semantics about the various ways a girl can call someone broke. Kim says that she would never say “broke-down” so the rumors must not be true that she said Gregg, Nene’s husband didn’t have much cash. Kim relates that she would instead say “Broke as hell,” or “Broke motherf**ker.” Solid evidence Kim. That would definitely hold up in a court of law. Jodie tells Kim she should try to keep up her friendship with Nene because she has a close relationship with Kim’s daughter Brielle.

Lisa takes Nene’ walking because Nene’s trying to lose some weight, and they gossip about the wig incident. They make fun of Kim and Sheree and Lisa stands by her stance that Kim is crazier than a methed up monkey on a Ferris wheel.

Kandi is a fair with her daughter Riley and friend Jing Jing. Kandi invites Jing JIng to Dwight’s party. Jing Jing knows Dwight, and apparently he likes to bring wine to doctor’s offices.

Dwight is shown preparing for his party, he’s having women and men being painted up like animals. He has firm direction for his caterers, and squeezes all the breastessess to make sure they’re in tip top shape. During a pep talk for his models he tells them to work it like it’s the last night performance of their lives and that he wants “High ‘dramer’ all night long.”

Kim is getting her legs heated. She also gets botox, but nothing else yet. The technology she uses is VelaShape, a laser-heat thing that smooths out cellulite, and takes a long time. Kim says she’s bored during the procedure, but she seems sad. She’s trying to keep up her “spoiled and wealthy” persona, but she’s phoning it in. She must be sad about the Big Poppa breakup. At the very least she’s sad about losing Big Poppa’s money. Or maybe she’s sad because she feels empty inside from all of the years of using her ass to chase cash. It’s probably tiring keeping up with her lies too.

Nene takes Sheree to Dwight’s party, and she claims to be meeting Kandi for the first time, but we’ve seen and heard her in scenes with Kandi. She said “I look forward to meeting her,” in this weird, fake voice that should have tipped Nene off. I’m not sure why she felt the need to lie about that. When Nene finally introduced her, she had this weird look on her face like she was trying to squeeze “I know you girl” and “Nice to meet you” in the same expression. Maybe this was filmed out of sequence, and I’m just reading too much into this.

When Dwight meets Kandi, he feels her up and down like he’s buying a horse. Of course, he honks her bubbies, then works his way down to her toes, a feature he’s very concerned about. Kandi’s a little freaked out by it. Kandi also reveals that she’s the first teetotaler in Real Housewives history. I thought they wouldn’t let you on this show if you didn’t have a drink in your hands at all times.

Read the rest of this recap on page 2.