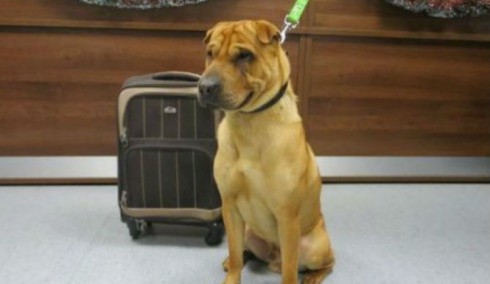 A 2-3 year-old Sharpei was left at a Scotland railway station tied up and sitting next to his own luggage. The canine’s suitcase was filled with his own stuff including a toy, pillow, food bowl, and food.

Right now Kai is under the care of the Scottish Society for the Prevention of Cruelty to Animals (SPCA,) while they find him a new home. The organization is also using this story to highlight the fact that many people buy dogs on impulse without fully realizing the responsibility dog ownership entails. The SPCA reports that Kai seems easy to please, and knows how to “shake hands.” He’s exhibiting no signs of abuse.