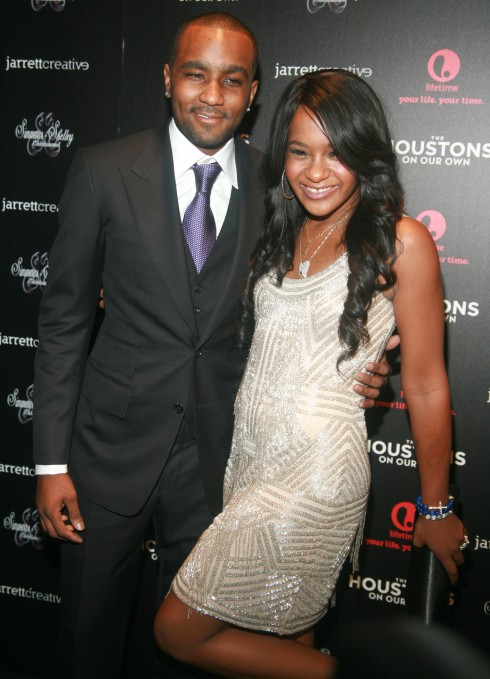 Bobbi Kristina is officially engaged to Nick Gordon. The daughter of the late Whitney Houston announced the news on social media last night along with a lengthy statement to her haters. In the statement, Bobbi slams her critics for saying that Nick is her brother and that her mother wouldn’t approve of their relationship.

“YES, we me nick are engaged,” Bobbi announced on her Facebook page.

The pair first sparked rumors that they were dating in March of last year and by fall, they had gone public with their relationship. Then, in November, Nick told fans that the two were no longer together.

As for the talk that Nick is her brother, Bobbi has had enough of it. “I’m tired of hearing people say ‘eww your engaged to your brother or if Whitney was still alive would we be together or would she approve of this.’ Let me clear up something, we aren’t even real brother and sister nor is he my adoptive brother. My mom never adopted him. In fact, mommy was the one who even said that she knew that we were going to start dating. My mom knows me better than any of you.”

Whitney had taken Nick into their home and raised him as a son but no documents ever made her guardianship legal. So, technically speaking, Bobbi is being honest. Nick is definitely not her brother, nor is he a blood relative.

“A lot of yall are saying that yall are only saying this all out of love. Which is bull because if that was so, all you would want is for me to be happy,” Bobbi continues. “People need to seriously stop judging my relationship. Pretty sure it’s my own decision who I want to be with. Yes, my relationship may not be perfect. We will have rough patches, just like every other relationship. And we have had our rough patches. You may or may not agree with my relationship. You may or may not respect it. Judge me, go ahead. Your opinions are yours and mine are mine. It is my life and not yours. The decisions I make have nothing to do with you.”

Is Whitney Houston is addicted to crack again?