It appears as though Bob Dylan may be in some deep doo-doo thanks to a portable toilet on his ocean view estate in Malibu. The facility has been there for about six months and is used by Dylan’s staff, including his around-the-clock security guards stationed in a small security building on the edge of his property. 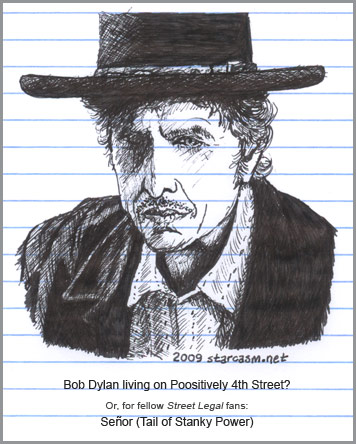 OK – this is a perfect storm for me! Dylan controversy and poop! (For those of you that don’t like either, stop reading now. Well, I guess if you don’t like Dylan then maybe you should keep reading) TMZ stole “Tangled Up In Poo” and the L.A. Times offered up the obvious “Blowing In The Wind” reference. Let’s see how Dylan nerdy and turdy wordy I can be!

Dylan’s neighbor Cindy Emminger says, “It started in September. I’d go into the frontyard and get nauseous.” (Actual quote – perhaps the last of the post) Cindy goes on to say that she has suffered through number one number two many mornings of the sh**tiot wind wafting from Mr. TamboURINE Man’s outhouse of the rising sun.

Dylan was almost apologetic in his response, pleading “all I diarrheally wanna doo doo is baby be friends with you. It’s alright Ma (I’m only peeing). This land is urine land, this land is my land. Chill out, don’t be a dingleberry like Achilles”

Cindy isn’t afraid of the celebrity neighborhood bully next door, completely ignoring her friends’ warnings that “you’re gonna make him loathsome when he ‘goes.'” She replied to Dylan’s pseudo apology by saying, “he may be a rock superstar to everyone else, but he is just a rank stranger to me! He’s over there in his mansion sh**ting on top of the world while his employees are taking workingman’s poos and turning my address into Hershey Highway 61 diarrhevisited! He keeps saying he’ll fix it, but number twomorrow is a long time and tonight I’ll be staying here with poo.”

The ballad of Stanky Lee and Judas Priest continues with the pooting star saying, “If you see her, say hell no! Most likely you go your way and I’ll go mine! I believe that if you gotta go, go now! When the doo goes down, it shall be released! I shall pee free! I’m not gonna change my way of stinking, and give into this poolitical world!”

A frustrated Cindy’s last words, “Just you wait Bob Dylan! If I have my way, you ain’t goin’ nowhere!”

And so the story of Cindy, dingleberries and the Jack of farts continues. For now, the times they aren’t a-changin’ and Dylan’s employees will surely get stuck inside a mobile john with the memphis poos again while Cindy seems condemmed to be alone with poo.

****UPDATE 3/18/09 – TMZ now has an exclusive video of some of Bob’s biggest fans! They belong to his neighbor and they’re supposed to help keep the stink at bay. How many fans does it take…

OK, for fun I’ve set up a geeky Bob Dylan poll! Here’s the video for “Tight Connection to My Heart” to help you decide:

Tara Reid claims she was nearly blinded during bar attack