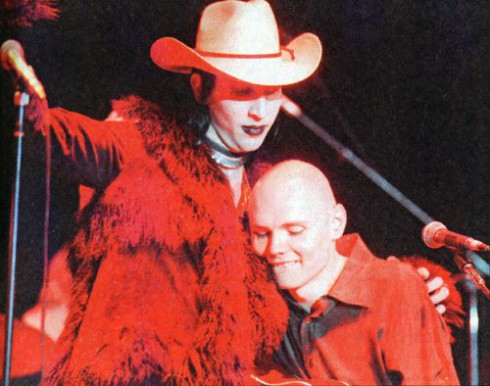 Marilyn Manson is speaking out again about his “feuds” with 90s music powerhouses Billy Corgan and Courtney Love, and he’s dishing details. In an Esquire interview the goth rocker says they merely drifted apart over the years, and it had nothing to do with a “guy code” inspired letter Billy penned to him about his love life.

“It was funny, because I ran into Billy [Corgan], and a lot of people think there was some kind of falling out,” he told Esquire. “It was mostly that he wrote a strongly worded letter about how Rose McGowan would ruin my life and ruin my career if I stayed with her, which was good advice, and he wrote it as a letter, which is very polite. There is sort of a guy code that I abide by where he totally offered his advice, and he was genuinely just looking out for my best interests. I hadn’t seen him in 15 years. I had forgotten how close we were, having not seen him in so long. He’s the one who taught me how to play guitar, so if it sucks or it’s good, it’s his fault.”

As for Courtney Love, he claims they never had a falling out either, but after his comments, they seem to have now. His biggest complaint about the notorious singer? She slept with his friends, but not him.

“We’ve always been weird with each other,” Manson continued, “because she’s slept with pretty much every one of my friends, supposedly. Not me, though. She, one time, told me she was mad at me because I didn’t want to f–k her and I was smarter than her. I said, ‘Well, you kind of proved your own point right there on that one.’ But it was cool.”