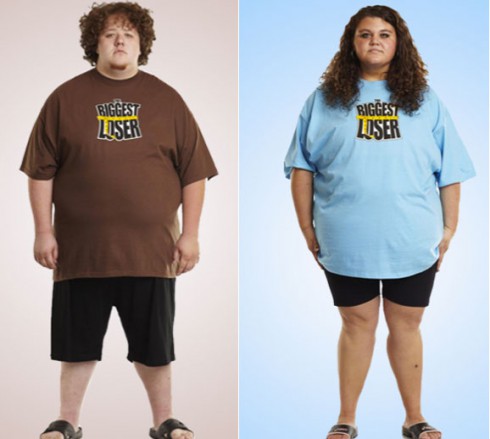 Twitter is . . . well . . . a twitter about rumors Austin Andrews found love on The Biggest Loser ranch this season. But his dad, Ken Andrews, who was eliminated this week isn’t talking. The Pasadena, California Pastor will comment on his falling out with Olympic Gold Medalist, Rulon Gardner, and about the traumatic events from his childhood that drove him to obesity in the first place; but, Austin’s love life is apparently off limits.

Biggest Loser fans couldn’t help but notice a few weeks ago in Episode 11 that Austin and this season’s sweetheart, Courtney Crozier, seemed awfully cozy when they worked as a team for the cooking challenge judged by Curtis Stone and Lorena Garcia of America’s Next Great Restaurant. And, later, the camera zoomed in to show us the stress on Courtney’s face as Austin took the scale. Why was she so concerned? He wasn’t even on her team. It must be love!

The Biggest Loser is tricky, though. Anyone who watches the show regularly has long ago figured out that the pre-commercial facial expressions don’t tell you anything about what the post-commercial scale will say. And now, we have at least one reason to think that the folks who produce The Biggest Loser were leading us off track by suggesting Austin and Courtney’s affection for each other. In his post-elimination interview, Arthur Warnum confirmed that Austin had, indeed found love, but that it wasn’t with Courtney! Who is it, then?

Could it be Kaylee Kinikini the Tongan girl next door who also came to the ranch with her father (Moses Kinikini)? Or perhaps, it is Irene Alvarado, who seemed almost transparent at the beginning of the season, but who now gets more beautiful and interesting with every episode. Or maybe the reason Hannah Curlee was so scared by the prospect of going home this week had less to do with moving back in with her parents and more to do with leaving her true love behind. 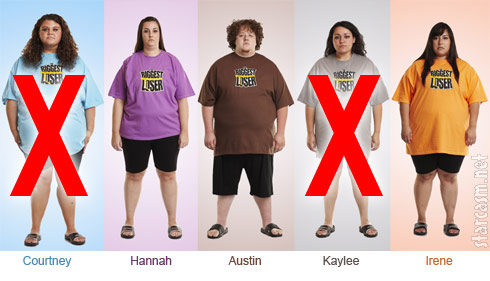 UPDATE – We now know a little more without really knowing anything more! Huh? In other words, we have drained the potential Austin love interest pool down a bit.

Arthur Wornum’s statement that Austin’s love interest isn’t Courtney leaves us with Irene Alvarado, Kaylee Kinikini, and Hannah Curlee as the three single women left on the ranch. So, of course, all eyes were on Austin and this trio of single ladies this week. Would we see any signs? Would the couple do something to out themselves to TV land?

For most of the this week’s episode, the players gave us nothing. They were working out. They were talking about nutrition. They were developing inner strength. Yaddah yaddah yaddah. We want to know who Austin’s girl is!

Then, there was a glimmer of something at the elimination table. Forced to give his vote either to Kaylee or Irene, Austin cited his bond with Kaylee, said that no one pushed him like she did, and cast his vote for Irene. Hmmm . . . could it be? Everyone else voted for Kaylee, though, so she was voted off, and it was time to say goodbye. After Austin’s speech, we were waiting to see if sparks would fly during the goodbye hug. And they did! In fact, the long embrace and sweet whispers of encouragement were followed by an intimate forehead to forehead, nose to nose, eye to eye moment. The truth was coming out: Austin and Kaylee were a couple. Right?

Wrong. The story that drove Kaylee’s Biggest Loser Transformation sequence was that her previous weight had made her too self-conscious to date, and that she’d never been kissed, but that she was finally ready. She had a date, she said directly to the camera, and it was with someone we might recognize. Yes. Yes. Austin, right? But, wait. Austin was still on the ranch. They wouldn’t let us see him yet. Oh, no. We were wrong again.

Kaylee’s date was Vance Jackson, of the 12th team; the team that just barely didn’t make the casting cut for the show, but had an opportunity on episode 13 to make it to the ranch. Vance and his mom, Leann Jackson hadn’t lost enough weight at home to pull off that Cinderella story, so they had to go home once again; but, it looks like something good happened to Vance during his 15 minutes of fame. He met Kaylee.

Ok. Ok. We’re happy for Kaylee. She’s great. Really. But, dang it. They’re messing with us. There are two single women left on the ranch: Hannah and Irene. Austin seemed entirely uninterested when Hannah was weighing in (or was it just edited that way?), and he voted for Irene to go home. Was Arthur lying about Courtney and Austin?

Enough is enough. Privacy schmivacy. Who is Austin Andrews dating?!

Update: We think we know!