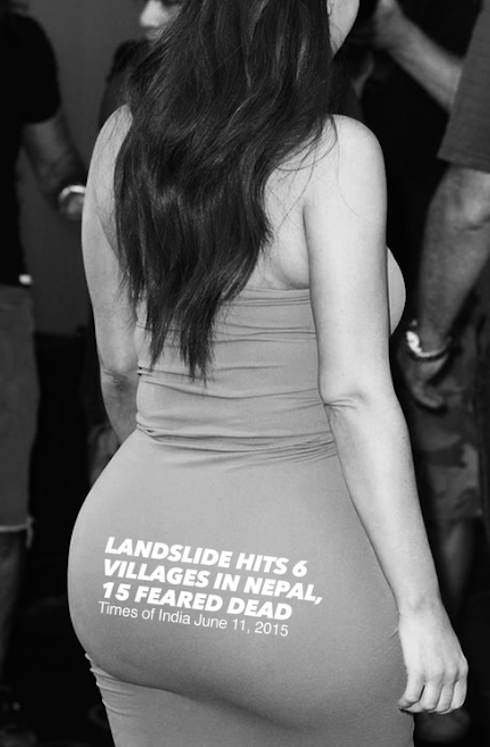 The Big Ass News uses Kim Kardashian to get you to care about actual news items. How? By planting the headline right on photographs of Kim Kardashian’s prominent behind. According to the site’s creators, they are trying to harness the power of the most famous bottom in the world and use it for good.

The full title of the site is “The Big Ass News: A Huge Platform for Important News.” The only instruction it offers is to “Click on Kim Kardashian…to read the full story.” Readers are then confronted with a series of images of Kim’s backside, across which creators Jennifer Garcia and Carl Larsson have plastered prominent, often-overlooked headlines from around the world. “Italy rescues migrants in Mediterranean, Telegraph, May 30, 2015,” reads one. “Hope for democracy in Nigeria,” reads another, from USA Today on the same date.

The site is only three days old. Garcia and Larsson update it regularly, and, according to them, the broader point is simple. Said co-creator Carl Larsson:

[We wanted to create a] cultural wake-up call and an immensely accurate grasp of the attention span of America….The idea is simple: Kim Kardashian’s ass gets more attention than important world issues. So we wanted to use that ‘huge platform’ that Kim Kardashian has in the media to spread awareness for news we should pay attention to as a global community.

Not a bad way to get attention. The pair also have a “Big Ass News” Facebook page, which they say already has 1,500 likes. The page doesn’t show up in a Facebook search, though, despite several different word combinations. For now, then, you’ll have to reward them with good, old-fashioned page views if you want to support the cause.