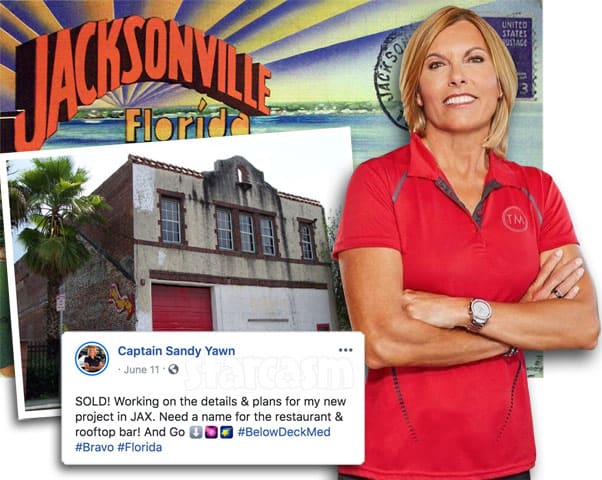 Below Deck: Mediterranean‘s Sandy Yawn is looking to expand her resume beyond being a yacht captain to include being a Yawntrepreneur in the restaurant and club business! Captain Sandy recently purchase a 106-year-old former firehouse in downtown Jacksonville, Florida and she hopes to turn the two-story building into a rooftop bar, private club, and restaurant.

The Bravolebrity made the announcement to her fans on social media last month. “SOLD!” she began a caption to a photo of herself standing in front of the building’s facade posted on Facebook and Twitter. “Working on the details & plans for my new project in JAX.” Captain Sandy then asked her followers for some name suggestions. “Need a name for the restaurant & rooftop bar!” she wrote, adding: “And Go ⬇️🎆🌠”

Prior to posting the photo of the building with the announcement, Captain Sandy shared this post about her Jacksonville business venture:

Downtown Jacksonville is becoming a Superyacht destination! The history here is rich with a vibrant culture. I am personally invested in this city. My sister created her school for children with autism and has not stopped! I hope you plan a trip to Jacksonville and discover the beautiful waterways and culture that this vibrant city has to offer. I just bought a 106 year old firehouse downtown to convert into a restaurant with a rooftop lounge. Now the journey begins!

The sister that Captain Sandy is referring to is Michelle Dunham, the executive director of the Jacksonville School for Autism. The school’s website shared a couple a paragraphs about the restaurant and revealed that the two businesses will be working together:

Captain Sandy Yawn of Bravo TV’s hit series, Below Deck Mediterranean and Jacksonville School for Autism (JSA) advocate, recently purchased a historic firehouse building at 618 W. Adams Street in downtown Jacksonville, with plans to convert it into a restaurant with a rooftop bar and lounge. Jacksonville School for Autism (JSA) is a full-service school for children with Autism Spectrum Disorders with programs to support students from Early Childhood Development through K-12. JSA also has a robust Post-Secondary and Vocational Training Program.

For many years, Captain Sandy has been a voice for JSA due to her celebrity status and the family ties she has with JSA. With her new endeavor, this could mean a potential partnership for the students of JSA by providing our young adults with on-the-job training opportunities such as cooking, food preparation and product sales. This not only provides our young adults the skills necessary to be successful and productive members of their community but also brings more autism awareness to the city of Jacksonville.

SOLD! Working on the details & plans for my new project in JAX. Need a name for the restaurant & rooftop bar! And Go ⬇️🎆🌠 #BelowDeckMed #Bravo #Florida pic.twitter.com/eo0adi3SJP

The specific plans for the building are still up in the air. “There’s going to be three (floors): the rooftop lounge, the second floor, which will be a private club, and then the first floor, which will be an open restaurant,” Captain Sandy told News4Jax soon after her reveal. “I would love to see Jacksonville become a super yacht or just a maritime hub and a destination place for these yachts to come into,” she added.

Sandra told First Coast News (video below) that she hopes to have the new business open by summer of 2021. One of her Twitter followers asked Captain Sandy if she will be moving to Jacksonville from Colorado. “At some point!” she replied.

According to real estate records, Captain Sandy paid $185,000 for the 7,600 square foot commercial property, located within a block of the Duval County Courthouse. That seems like a VERY sweet deal given that the company she bought the property from paid $265,000 for it in 2009. If you’d like to see photos of the interior, there are still some available to look at on the Homesnap page for the listing.

You can also see some video footage inside the building in this news report from News4Jax:

And here’s another video report on the story from First Coast News:

CONGRATULATIONS to Captain Sandy Yawn! I’ve spent a little time in downtown Jacksonville and her restaurant/club/bar is going to be a perfect addition! The next time I’m in town I’ll be sure to drop in. Maybe I’ll even get lucky and show up on a night when Below Deck: Med is airing a new episode and I can sip on a drink while enjoying a viewing party on the rooftop bar!