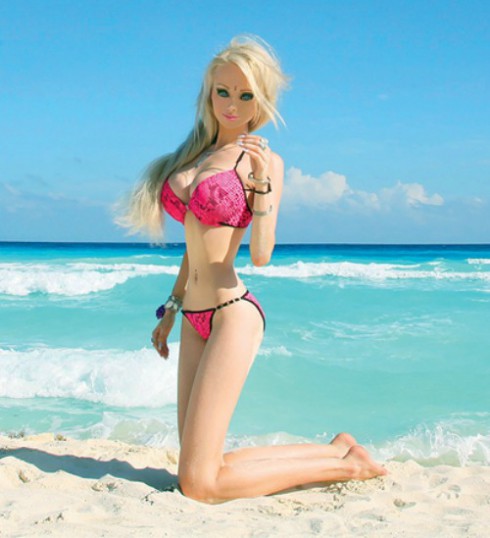 Human Barbie Valeria Lukyanova is back with a new, even more bizarre interview than when we heard from her in 2012.

Just like the last time, Valeria (or “Amatue,” as she likes to be called), spoke about transcendence into new dimensions — including the 21st Dimension, where she got the idea for her new nail art.

But, lest you think Valeria is entirely forward-thinking, the Human Barbie went on to state her positively neo-Nazi views about race.

“Ethnicities are mixing now, so there’s degeneration, and it didn’t used to be like that. Remember how many beautiful women there were in the 1950s and 1960s, without any surgery? And now, thanks to degeneration, we have this,” Valeria told GQ‘s Michael Idov, explaining why plastic surgery is now so prevalent.

For her part, Valeria only cops to getting a boob job. She claims to have achieved the rest of her seemingly unnatural form through diet, exercise and creative contouring with makeup. She’s adamant that any “before” pictures have been digitally manipulated.

“Most of my old pictures that you find on the Internet are Photoshopped,” she told Daily Beast in August 2013. “Don’t believe any stories about me having rib-removing surgeries — they aren’t true. The only surgery I had was the breast surgery. My mother’s waist is as narrow as mine — I inherited that from her.”

Despite having what she considers to be such enviable attributes, Valeria told GQ she has no plans to procreate.

“The very idea of having children brings out this deep revulsion in me,” said Valeria, who is married to a childhood friend. “I’d rather die from torture because the worst thing in the world is to have a family lifestyle.”

Instead of having her own children, Valeria previously said she wants to serve as a spiritual guide to the rest of the world — and considers her unique look to be a great asset in that mission.

“I am a lecturer on the subject of out-of-body travel. If a nun starts talking about spirituality, will anyone notice her? No, No one will,” Valeria said in Vice‘s Space Barbie documentary. “But if a beautiful, inspiring young woman starts talking about it, many people will start thinking. So I use my appearance to promote my spiritual ideas. It works perfectly.”

Michelle Duggar before and after makeover photos

BEFORE & AFTER Nicki Minaj slams ESPN Magazine for retouching her photos