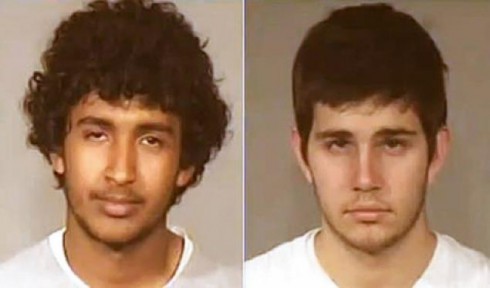 If you’re gonna break into a car don’t butt dial 911 while committing your crime. This public service announcement is brought to you by Fresno, California stoners Nathan Teklemariam and Carson Rinehart.

Nathan and Carson were out driving around in their neighborhood when they got the bright idea to commit a burglary. The two 20-year-olds could be heard discussing their crime and just how bad they were wanting to get high as during the entire ordeal they were unknowingly on the horn with an attentive 911 dispatcher.

Suspect: “Get the bolt and give me the hammer just in case.”

(Noise on the other end as the pair smashes a window in the car, and finds prescription drugs.)

Suspect: “Good evening, what did I do?”

Suspect: “Not at all, I’m just driving my friend home.”

Teklemariam and Rinehart were arrested and charged with one count each of burglary, conspiracy to commit a crime and possession of stolen property after police stated that items taken from the stolen car in question were found in their back seat.