Sources close to Lil Wayne and Christina Milian say that, yes, their PDA at the ESPY Awards means they are dating.

“It is totally true,” a source told Us Weekly. “They are hooking up.”

The problem is, both come with some strangely intertwined baggage.

For one, Christina recently broke off her engagement with Jas Prince. He used to be friends with Lil Wayne and is credited with helping Drake and Christina get deals with Lil Wayne’s record label, Young Money. Their friendship soured when Jas filed a lawsuit alleging Wayne owed unpaid royalties for his role in the Drake deal.

Wayne then fired back with “Tina Turn Up Needs A Tune Up,” a song with a not-so-subliminal message about Jas’ then-fiancée: “I’ll take your Tina / She needs a king, f**k a prince.”

But that isn’t the complicated part… Christina and Lil Wayne’s exes are also exes. 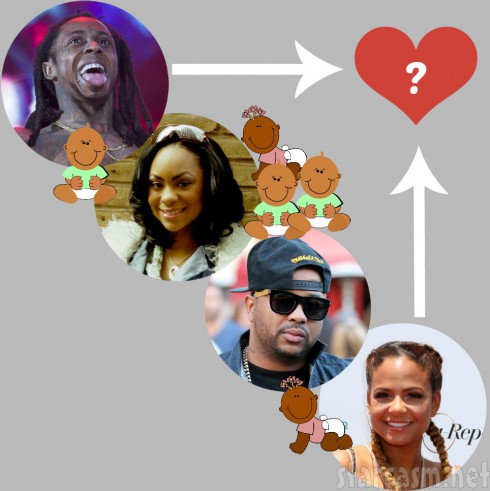 To explain: Singer Nivea and rapper The-Dream were married in the early 2000s and share three kids. After they split, The-Dream got together with Christina Milian and they had a daughter before divorcing in 2011. Nivea moved on with Lil Wayne and they have a son. Ergo, Christina’s daughter and Lil Wayne’s son share three half-siblings.

If a Lil Wayne/Christina Milian romance is just too weird to comprehend, TMZ offers an alternative: Because Christina is signed with Wayne’s label and is set to release an album, their romance may be manufactured to drum up press.