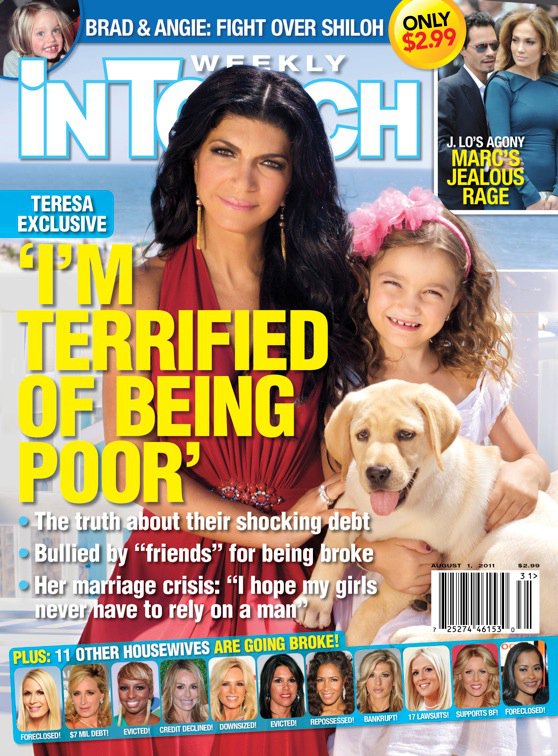 In the August 1, 2011 issue of In Touch Weekly the tabloid listed The Real Housewives of Orange County‘s Alexis Bellino as one of many Bravo housewives suffering from serious financial issues. The issue has angered the Bellinos to the point where their lawyer has written a cease and desist letter to In Touch demanding a retraction with the threat of a lawsuit if the tabloid doesn’t comply. 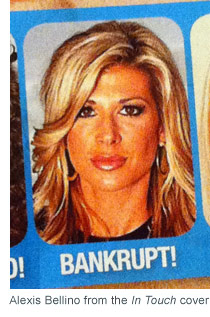 At one point in the letter it appears to reference the recent suicide of The Real Housewives of Beverly Hills star Russell Armstrong (who was reportedly driven to kill himself in part because of how he was portrayed in the media) by stating, “My clients have seen firsthand the consequences that defamatory tabloid stories can wreak on people’s personal and professional lives.”

So what exactly did In Touch say about Jim and Alexis Bellino?

Alexis’ photo and the photos of ten other housewives are featured on the cover with the word “BANKRUPT!” written below her picture. In the article itself In Touch‘s claims were rather vague, stating “After selling off her home at a fraction of its cost to avoid foreclosure, Alexis Bellino still refuses to admit she and her husband, Jim, have money troubles. It also includes a (rather sexy!) photo of Alexis lounging by the pool with the caption, “In a bid to earn money, Alexis has started a clothing line.” 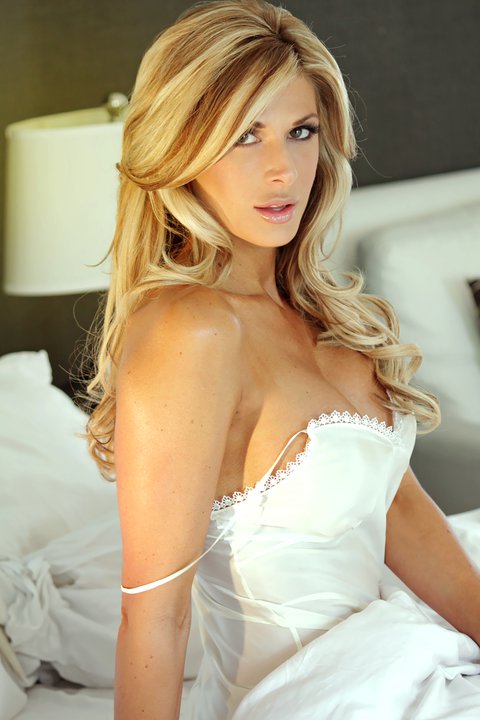 ^ Usually I try to work in funny or relevant images, but with Alexis Bellino I have no choice but to just go with the sexy!

The “foreclosure” mentioned in the article is in reference to the much-publicized incident involving a property owned by one of Jim Bellino’s companies (Global Marine, Inc.) that went through the preliminary stages of foreclosure at the beginning of this year just before being offered for short sale in February. The Bellinos claimed all along that the property was never actually in risk of foreclosure and that the preliminary proceedings were merely the result of the business-savvy process in which they were going to unload the home, and those claims appear to be backed up by the resulting listing and non-foreclosure. (You can read the couple’s statement about it HERE.)

As far as the “BANKRUPT!” claim, that is also in reference to Global Marine, Inc., which filed for bankruptcy as part of the same business deal that allowed them to prevent their home from going into foreclosure. (The Bellinos explained the bankruptcy in another statement you can read HERE.) 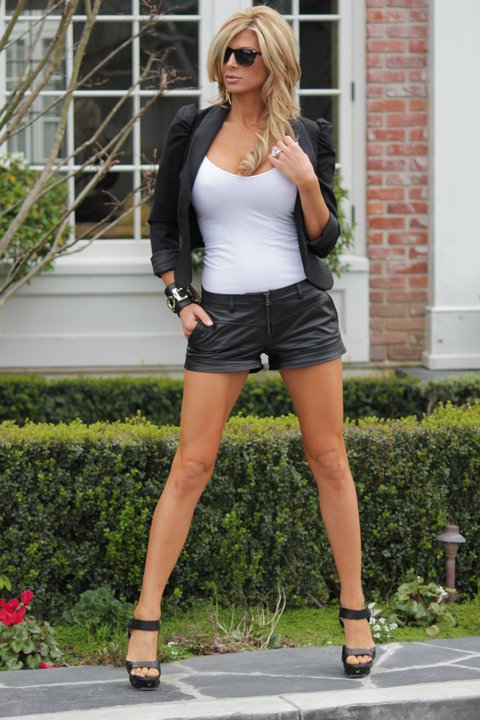 ^ How can Alexis Bellino be in financial trouble when she is so obviously in the black… leather short shorts!?! She’s like the blond female version of The Fonz. Ayyyyyylexis!

In the Bellinos’ defense it does seem that they get unfairly stigmatized as being in dire financial straights because all people see is that they “have declared bankruptcy” and their “house is scheduled to go into foreclosure,” when those are actually just the result of some business maneuvers.

In the defense of In Touch, I don’t think they said anything that was technically libelous. To say the Bellinos “have money troubles” is hardly specific. (Everyone has “money troubles,” right?) And the use of the word “bankrupt” on the cover is referring to a business owned by the family. It’s a little gray sure, but libelous? I don’t know. Actually, in the letter, the attorney calls the tabloid’s statements “patent, malicious, and libelous comments.”

And speaking of the letter, here it is in its entirety:

Re: Demand to Cease and Desist and Retract Libel against Jim and Alexis Bellino

Among many causes of action, your magazine’s conduct also constitutes: Tortuous Inference with the business and contractual relations, Intentional infliction of emotional distress and Unlawful business practice. As such, they are actionable and expose you to the imposition of compensatory as well as punitive damages.

Below are some of the more patent, malicious, and libelous comments made by you in your magazine that need to be retracted:

1. On the cover of In Touch Weekly dated August 1, 2011, you printed the headline “I’M TERRIFIED OF BEING POOR” regarding a cast member of the television series The Real Housewives of New Jersey [Teresa Giudice]; and at the bottom of the same cover, you printed the words “11 OTHER HOUSEWIVES ARE GOING BROKE!” with our client’s picture and word “BANKRUPT!” underneath her picture.

2. Inside the magazine, in the “CONTENTS” section, you printed the words: “And the truth about how other housewives have gotten themselves into major money problems”. Referring the readers to page 30 where the article starts.

3. Page 34 of the magazine begins the cover story article titled: “BANKRUPT! EVICTED! FORECLOSED! HOUSEWIVES ARE GOING BROKE”. On page 35 there is a picture of Alexis with the title: “Alexis: Is she in denial?” questioning her mental state regarding the alleged financial problems. The article then delivered its final blow: “Alexis Bellino still refuses to admit she and her husband Jim have money troubles.” 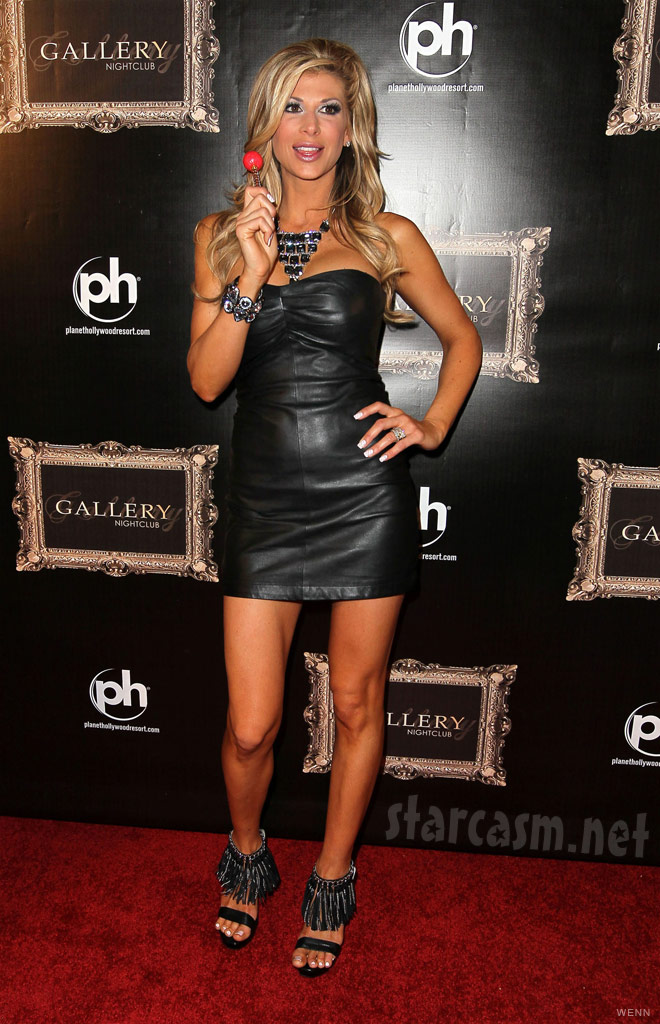 The totality of your printed article is not only devastating, it is simply false. I doesn’t just falsely state that our clients are “BANKRUPT,” it paints a portrait of people who are in denial of their financial condition. Jim and Alexis Bellino are in great financial health and the grotesque and false image of them you have drawn causes severe damages to them personally and professionally. My clients have seen firsthand the consequences that defamatory tabloid stories can wreak on people’s personal and professional lives.

If you do not immediately publish the requested retraction, and cease and desist from further Tortuous interference and making false and malicious comments about the Bellinos, we will have no option but to file suit against you.

Group of children credited with saving 6-year-old from pedophile