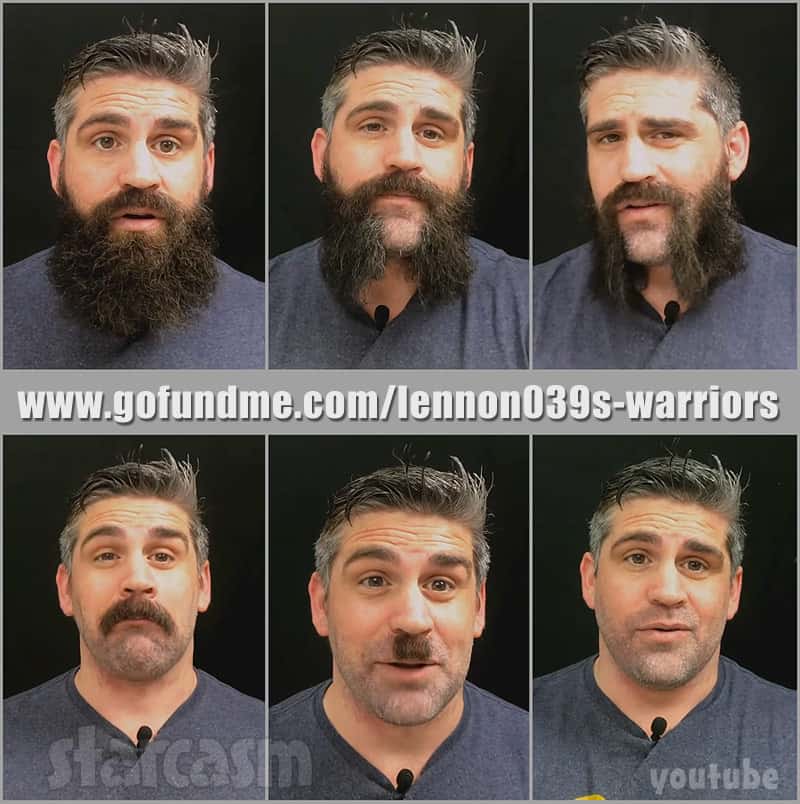 Cast members of the various 90 Day Fiance shows are notorious for launching GoFundMe campaigns for themselves, but Before the 90 Days Season 2 star Jon Walters recently bucked that trend by supporting a GoFundMe for someone else: one-year-old Lennon, a little girl in California who has been diagnosed with a very rare disease.

Jon revealed in an interview with Life & Style that he stumbled on Lennon’s story on Instagram. Lennon’s cousin tagged Lennon’s mom in one of Jon’s posts promoting his and wife Rachel’s Cameo appearances and wrote “Early Christmas present? 🙂 ” Jon clicked on Lennon’s mom’s profile link and saw “looking for a cure for SM” in her bio as well as a GoFundMe link.

Jon visited the GoFundMe campaign where he first learned about Lennon’s story. From the campaign:

Lennon is a 1 year old precious baby girl, that has a current diagnosis of:

“Systemic mastocytosis (SM) is a form of mastocytosis in which mast cells accumulate in internal tissues and organs such as the liver, spleen, bone marrow, and small intestines. It is typically diagnosed in adults. Signs and symptoms vary based on which parts of the body are affected. The disorder is usually caused by somatic changes (mutations) in the KIT gene. Most cases are sporadic and not inherited, but familial cases rarely have been reported.”

Her tiny body produces too many mast cells. Her skin blisters easily and she is at risk for severe anaphylaxis. There is little known about Lennon’s disease and there is a need for research, education, advocacy and resources for , their families, doctors, and caregivers.

Jon reveals that the campaign description and the photos of Lennon “broke my heart.”

He continues: “So I saw that, saw how badly Lennon really was ill, saw the GoFundMe had plateaued out and they’d exhausted all the people they knew who could donate. I just thought, I got 95 thousand people following me and I don’t need them to follow me for me. We didn’t do the show to get famous. So, I decided to share my platform a little bit with Lennon.”

But Jon wanted to do more than just share links and messages — he wanted to somehow put his money where his mouth is, or at least, around where his mouth is. “I brainstormed a lot thinking about different ways that we can help and I just thought, you know what? Everyone’s got an opinion about my beard, so people can put up or shut up.”

Jon decided to let anyone who donated to the campaign get a vote on the fate of his beard by simply hash tagging a comment on the GoFundMe campaign after making a donation with either #shave or #save. He waited a month before tallying the results, which of course were in favor of a facial trim.

The chin-broomed reality star followed through on his promise and shared a YouTube video of himself shaving on Sunday. Here’s the video along with some excerpts of what Jon had to say in the clip:

So I am going to shave my beard. I wanted to raise awareness, and I wanted people to share [Lennon’s] GoFundMe and follow her on Instagram. For a month that is what I’ve been doing, and it’s worked really well! So many nice people have reached out to me, and reached out to Lennon’s family, and followed her, and donated.

It was a bit close [between] shave and save, but shave won. So, without further ado, and without wasting any time because I’m not about that, I’m just gonna have a bit of my drink [takes a swig of what looks to be beer]. So yeah, huge thank you to everyone who who wants me to get rid of this amazing beard.

Eventually, Jon gets to trimming, and he shares funny little comments at the various stages of the process: 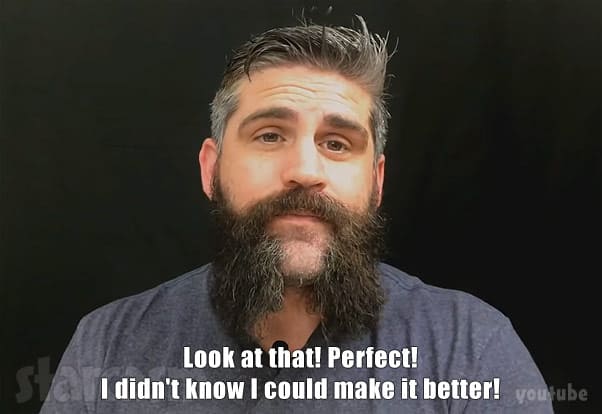 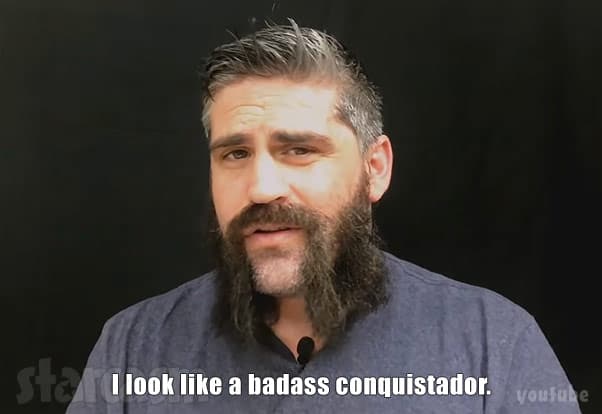 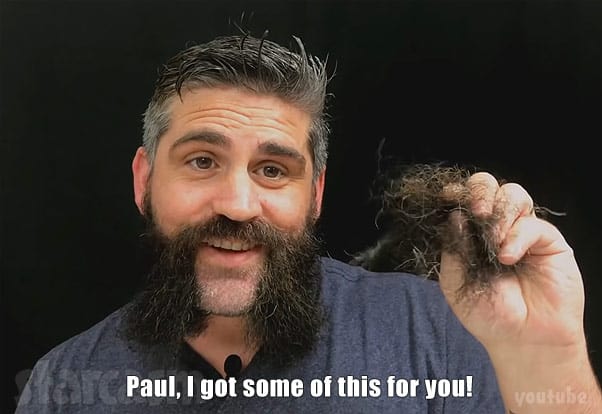 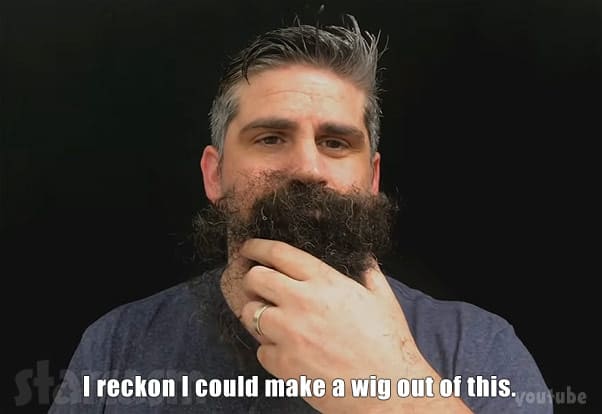 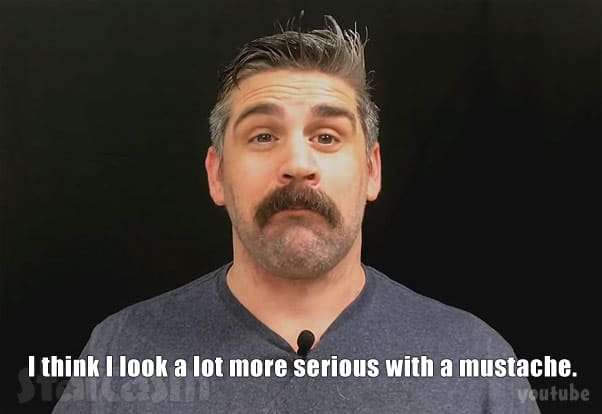 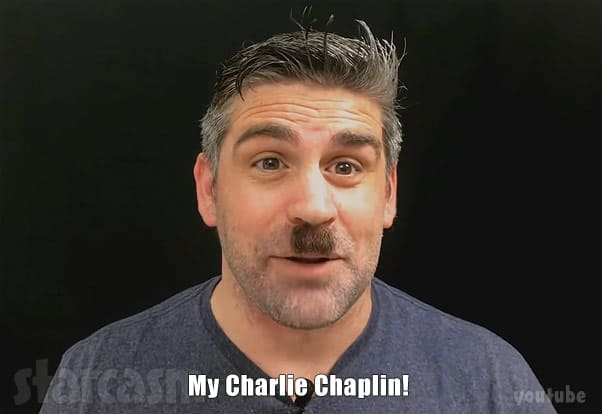 Once the beard removal was complete, Jon got back to focusing on the very important reason he did it:

Seriously though guys, Lennon is a beautiful little girl who is very sick, and if you can spare some money as a one-off, or make regular little donations, it would be amazing. Her parents are wonderful people who have to wake up every every few hours to give her her medicine, and they’ve got split that time with with Lennon because of work, and it’s just a really, really tragic place to be when they should both be there as much as they can.

The reason I shaved my beard is because I had nothing of value other than a voice, a platform, and a beard on my face. I’m just some d*ckhead, just some d*ckhead from England with a beard. I wanted to get people’s attention. If I can shave my beard, and I can share her social media, and I can make small donations, then I’m asking if you will as well.

I’m going to put all the links all over this. If you thought this was a bit funny, and you share this, and you share her GoFundMe and her Instagram and her Facebook, it will make a difference, I promise.

We’ve got a few other ideas coming up. I’m obviously in touch with a lot of the cast, and I’m thinking about getting some signed autographed stuff for raffles and that sort of stuff. Maybe some bigger prizes, maybe some quids in where people buy tickets and the winner wins half.

I need you, if you’re watching this, to help me spread the word about Lennon and her GoFundMe. She’s a very, very sick little girl and she needs our help. I hope you enjoyed watching me get rid of my beard — seeing lots of people have been talking about it for a long time. So there it is, gone. Lennon, I hope this reaches the ears of many, many people and they spread it and the money you need comes to you very, very soon.

BEFORE THE 90 DAYS Larry quits McDonald’s to Youtube himself living in a camper in the Phillippines?