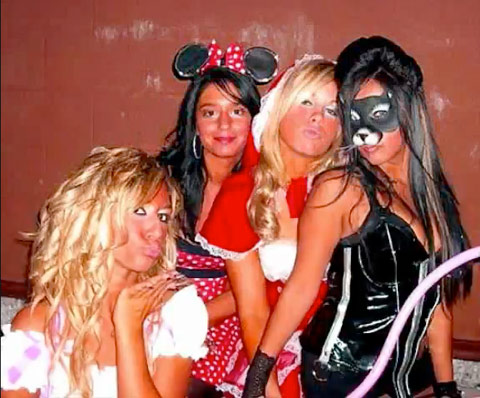 Jersey Shore‘s Nicole “Snooki” Polizzi must have known some time ago she was destined for greatness because she started her own video channel on youtube featuring all sorts of crazy Guidette tomfoolery! Here is the easy-to-browse complete collection of all the Snooki video yumminess with brief commentary from your source for all things Snooki, starcasm.net! There are a couple vintage high school cheerleading vids from her defunct myspace account thrown in as a bonus! 18 total Snooki videos!

We’ll do these chronologically, starting with the most recent and working our way back in time. Please note that there is a PAGE TWO with more videos!

Snooki getting ready to go out (September 15, 2009)
Pretty much just like it sounds. It’s a short clip filmed sideways, but you can still feel the Snooki vibe as she shows off her animal print Playboy purse and laughs it up with a gal pal!

.
.
Snooki before the club. (September 15, 2009)
Once again Snooki getting ready to go out having fun with her cell phone video camera. (Pretty bad quality)

.
.
Snooki out the sunroof. (September 15, 2009)
Snooki puts her poof and sunglasses to the test by poking her head out of a sunroof in a fast-moving car.

.
.
Snooki at school. (September 15, 2009)
Snooki takes a break from a 4-hour class to drop a few f-bombs and show off her Kim Kardashianism.

.
.
‘Guidette Skateboarding” 101 (May 24, 2009)
Snooki shows off her amazing balance by holding an empty beer bottle and dancing on a skateboard beside a green swimming pool. Impressive, but disappointingly non-disastrous.

.
.
Hottest Guidettes Ever (April 10, 2009)
Guidette slideshow that makes J-Woww, Sammi Sweetheart and Angelina look like Southern bumpkins! (Though not the Guidettest, my favorite is the image with Snooki in a catsuit! I used it at the top of this post.)

VIDEO: Watch Will Smith hit a journalist who tried to kiss him on the mouth

PHOTO – Katy Perry hangs out with Snooki at 2010 Grammy Awards