TMZ reports El Debarge has been arrested for possession of a controlled substance and is being held on bail in L.A. For those that don’t subscribe to “DeBarge Weekly,” El was arrested last year for all sorts of offenses, including drugs, vandalism and domestic violence. He’s scheduled to be back in court tomorrow for his most recent run-in, and we’ll keep you updated.

A quick history lesson for our readers under 30: El DeBarge was part of the Motown family band DeBarge from 1979 until he went solo in 1986. DeBarge (the band) changed the face of contemporary R&B music with their gritty smash hit “Rhythm of the Night,” a dark, brooding song that tried to tackle the angst of inner city urban life with lyrics like:

El DeBarge’s boyish falsetto was perfectly suited for tackling social and political issues, but it also had the capacity to relay the existential malaise of the 20th century individual, as evidenced by El DeBarge’s solo career with songs like “Who’s Johnny?” from the robotic E.T. movie “Short Circuit.”

Alas, society seems to have a difficult time digesting artistic genius like El’s and that’s why these prophets tend to get spat back out after the world swallows a few Top 40 hits. But you hold tight, El D, because there are people out here that still believe, that still lie awake at night, staring outward and inward at the darkness, wondering, “Who is Johnny? Who IS Johnny?”

****EXCLUSIVE! Starcasm paper-azzi were on the scene when El was arrested and have this disturbing image from his apartment: 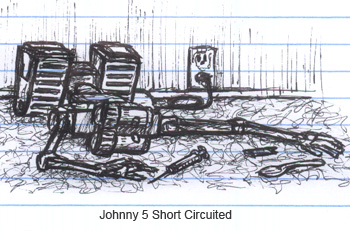 Authorities have informed us that there are no laws against robots using controlled substances so they left Johnny 5 behind. Where is PETR when you need them?

****UPDATE 10/28/08 – El DeBarge has been sentenced to two years in state prison beginning immediately. We’ll keep the cand-Els burning for you, bro 🙁