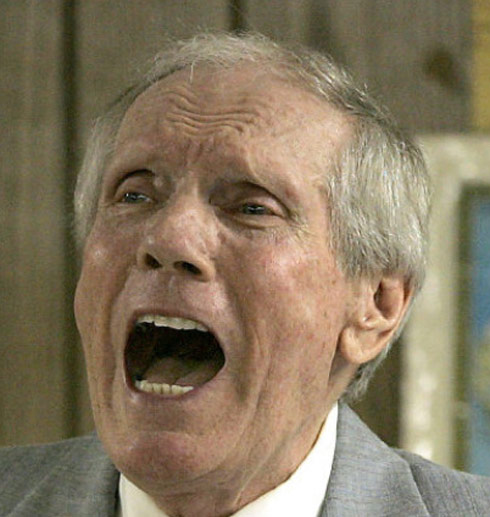 Following news that he was slipping away as shared by his estranged son, controversial pastor Fred Phelps Sr. of Westboro Baptist Church has died at 84.

WIMB news out of Topeka, Kansas reports that one of Phelps’ children, Tim Phelps, said that his father died last night. Shirley Phelps-Roper has confirmed the news with the Topeka Capital-Journal.

By all accounts it appears as if his church’s proselytization of God’s hate for just about everybody will soldier on as their official Twitter feed is using the attention garnered from the news of their founder’s death to share their unique views.

So – the death of Fred Phelps’ body, a man who preached a plain faithful doctrine to an ever darkening world, is nothing but a vain, empty, hypocritical hope for you.

It’s like every journalist in the world simultaneously set aside what little journalistic integrity they have, so that they could wait breathlessly for a rumor to publish:  in-fighting, succession plans, and power struggles, oh my!  How shameful!  You’re like a bunch of little girls on the playground waiting for some gossip!

Listen carefully; there are no power struggles in the Westboro Baptist Church, and there is no human intercessor – we serve no man, and no hierarchy, only the Lord Jesus Christ.

It’s not about what you take with you, it’s what you leave behind…