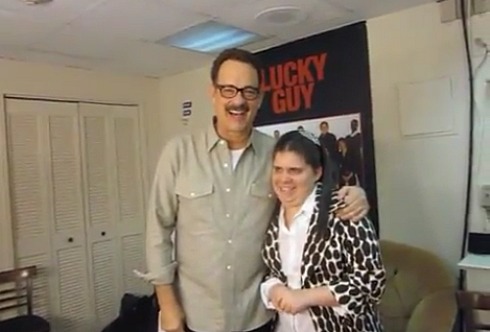 Tom Hanks has been my favorite actor ever since my parents inexplicably let me watch Forrest Gump when I was 5 years old. Years later, I grew to love Tom even more when I realized he’s not just a masterful actor, but also a top-notch human.

Case and point: The Academy Award winner met up with Sarah Moretti, one of his biggest super-fans, after a March performance of Lucky Guy.

According to the info for the YouTube videos, Sarah has Autism — but had no trouble relating to her idol as she showed him the scrapbook she’s kept of his accomplishments.

“Sarah saved all the things she could find about Tom Hanks over the years. Here he is going through her binder of past memories. He was so gracious to look through it and make a big fuss.”

(I’ll gladly admit Sarah has me beat in the “super-fan” department. She even celebrates Tom’s birthday!)

Although he was only able to visit for a few minutes, Tom autographed Sarah’s scrapbook and left her with a memory she’ll never forget. It’s nearly enough to make my heart burst with happiness… Thanks for existing, Tom Hanks!

What’s the true story behind the Captain Phillips movie?