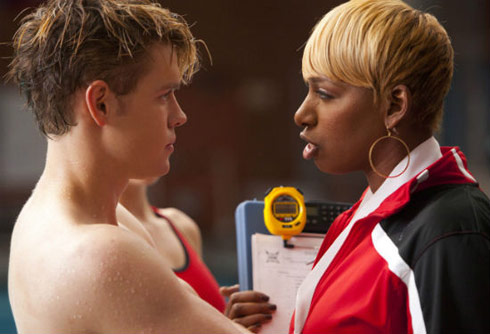 Glee stars Lea Michelle and Chris Colfer announced during their appearance on Watch What Happens Live a few weeks ago that The Real Housewives of Atlanta star NeNe Leakes would be appearing on Glee as swim coach Roz Washington and now we have video proof! Check out these two video clips of Miss Linnethia Leakes from the set of Glee during taping of her episode “Yes/No.”

In this first clip NeNe talks about her character and what it’s like working on the show:

“You have a whole bunch of kids here and I’m the mom. So I have to put them in their place and I love that.”

“Coach Roz has won a bronze metal for individual synchronized swimming, which doesn’t exist. Only on Glee. (laughs) You gotta love it.”

“In real life I’m not a good swimmer. Like, I barely swim.”

This next clip appears to be the actual scene in which NeNe is introduced.

NeNe (to Chord Overstreet’s Sam Evans character): “Sam Evans! I am Coach Roz Washington and you are one straaaange lookin’ kid. I’ve never seen lips like that on a white child! When I was growing up everybody said that black folks couldn’t swim, but I had a dream! So I swam my way to the Promised Land and got my 40 acres and a pool!”

Although the addition of the peachy dynamo NeNe Leakes as Coach Roz Washington will obviously be the main plot point on the “Yes/No” episode (which airs January 17), it will also feature another minor subplot in that Will Schuester plans on finally asking Emma Pillsbury to marry him. (Ho hum) 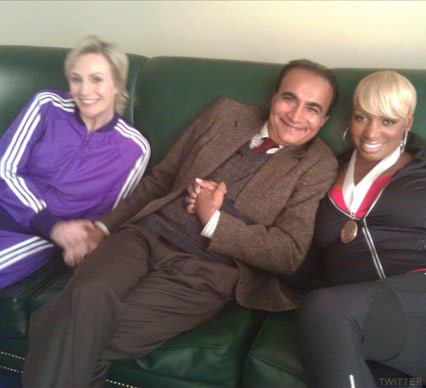 VIDEO Apollo Nida behind bars after being tardy for prison party