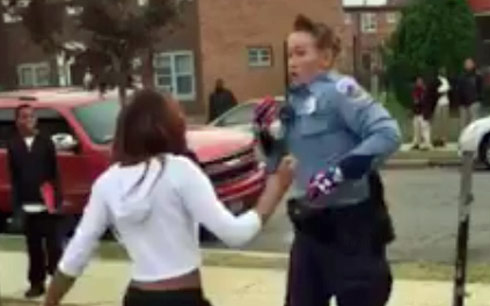 On Monday, a D.C. police officer was attempting to break up two crowds of teenagers. When she was challenged by 17-year-old Aaliyah Taylor with some “Whip/NaeNae,” the uniformed cop obliged by throwing down with a stanky-legged dance-off for the turf!

Like so many other actions by police over the last few months, this incident was caught on cellphone video. Unlike many of those that have been so widely publicized, it left not only Miss Taylor, but just about everyone else who’s seen the footage feeling good about the way this cop went about doing her job:

Taylor said, “Instead of us fighting, she tried to turn it around and make it something fun. I never expected cops to be that cool. There are some good cops.”

Office Funkenstein’s true identify has not been revealed, but the D.C. Police Department did confirm she was one of their own.

Marinos Marinos, the secretary of the D.C. police union, said these sorts of personal interactions between officers and residents aren’t unusual — it’s just that most don’t make it to the Internet. “We are humans just like everyone else,” Marinos said. “Everyday we come in contact with thousands of citizens and almost all of them have positive outcomes.”

Plus, he added, the officer had about 40 pounds of equipment and clothes, so it likely wasn’t even a fair competition.

PHOTO ‘Deeritos’ situation reminds us all not to litter