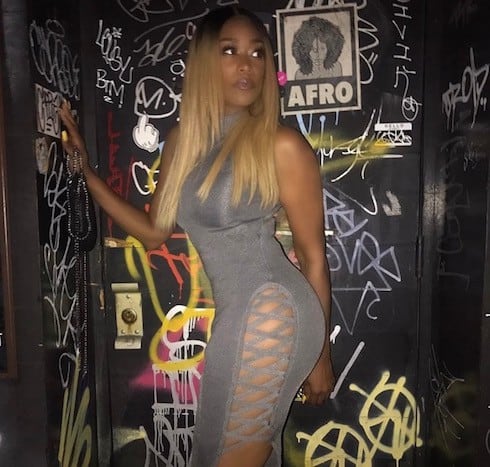 But before Tami can even get to Porsha Williams, she has some preliminary shade for Evelyn Lozada, whose return to the cast of Basketball Wives has been met with much fanfare. When asked for her thoughts on Evelyn’s return, Tami references Evelyn’s OWN show Livin’ Lozada–”which was canceled,” in case you forgot–and then says that “fame is a drug” to which Evelyn might well be addicted. (A few minutes later, Tami returns to Evelyn, saying she’s the “biggest non-MF-ing factor” on Basketball Wives this season because she came back to the show after telling people she was done with it years ago.)

The fireworks come a little bit later on. At 5:34 in the video, Tami is asked whether she thinks reality TV has changed for the better or for the worse over the past few years. She says unequivocally that things have gotten worse: “Now,” according to Tami, “reality TV is filled with a bunch of people who think they have to one-up what somebody did last season. And it may not really be their real emotions, but they’re looking for a moment. And I feel like some of this stuff is like, ‘Child. You know you don’t really do that. You know you don’t really care that much about them shoes.”

Then–because leading questions are awesome–Tami gets asked, straight-up, who from the cast of The Real Housewives of Atlanta would fit best with the cast of Basketball Wives:

It’d probably be Porsha. She have just enough petty, slutty…wanna-be classy…to be one of our new girls. [Laughs] I love you Porsha, but that was…you know, my petty be at an all-time high sometimes.

Meanwhile, on her own show, Tami is busy sowing the seeds of discontent between Evelyn and Jackie Christie. Basketball Wives‘ timeline has just reached the real-life drama from last fall between Jackie and her daughter Takari, which started after Takari’s son Jaxson suffered third-degree burns on his head, neck, and chest in an accident at daycare. Takari set up a GoFundMe page to help with Jaxson’s medical bills, but Jackie refused to contribute, saying that Takari never asked her personally. But Evelyn contributed–something that did not sit well with Tami:

Given that things between Jackie and Takari remain tense to say the least, it seems a safe bet that any storyline involving Jackie distrusting Takari’s motives or the motives of anyone associated her will almost certainly end in tempers flaring.